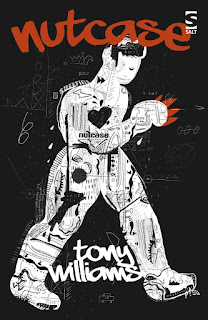 I'm grateful to the publisher for a copy of this book.

In this remarkable, not to say unusual, book, Williams tells the story of Aidan Wilson, a young man growing up on a tough estate in Sheffield.

Aidan's story is inspired by the Icelandic Saga of Grettir the Strong. I'm sorry to say I am not familiar with that so I can't comment on how it has been adapted but I was very impressed with the way Williams maps the chaotic (from my comfortable middle class perspective) lives of his protagonists, adrift in a haze of drink and drugs and violence, onto the heroic pattern that we see in many ancient tales. After all, these sagas, ballads and myths are generally stories of strong men, strong warriors, whose chief concerns are drinking, having sex and fighting. To judge the lifestyle of Aidan and his mates while retelling and praising stories such as Beowulf or the Illiad seems rather hypocritical, perhaps. So a lot of respect is due Williams for forcing a new way of seeing things.

That said, it's often a hard book to read. No punches are pulled: rather we get close descriptions of fights and injuries, of the quantities of drugs and drink consumed, of squalid flats and squats, of a lifestyle that might be described as hedonistic if you thought anyone was actually having a good time.  At times I didn't want to go on reading, although Williams does tell a rattling good story and it's so episodic ('The next thing was...') that none of the incidents lasts more than a few pages.

It's a story that is very much narrated, from the first sentence ('Mick Wilson was a man of steel.') to the last ('And there would be a little gap and then they would say "Same again?" ') Indeed, it soon becomes clear that the audience is part of the story - as Aidan rises briefly in popular esteem when he knifes a child abuser and then plunges again, we're very conscious of there being an audience, a wider society judging him, urging him on, condemning, cheering. Sometimes it's the people on the estates around (Irene at the taxi office is a regular chorus as she sucks on her cigarette), sometimes it's a wider public reading the tabloids or following on social media.

And sometimes, of course, it's us, the readers of the book.

If the book's hard, that's appropriate because Aidan himself is also hard in several respects - a tough man, yes, but also difficult to understand, often placid and accepting (as long as he has a few cans and the odd tablet to hand) of what seems an awful life, then animated, driven to avenge a wrong or pursue a feud. He's hard in another sense - unyielding to fate or society around him, apparently content to go the way he must. The only hint of weakness we see is the nightmares - PTSD, the prison psychologist says - brought on after that stabbing. How they affect Aidan's waking hours is left to us to guess.

The book rises to the pitch of a classical tragedy, letting Aidan rise, having apparently done something good for once - and then fall, doomed by some quirk or flaw of character, some lack of interest or focus that always sees him back with the drink, the drugs, shifting from one grim lodging to another, living from one side of the law to another.

Or, let's face, it doomed by having lousy parents, little hope of anything better and too many easy ways out. What was it they used to say about drink being the quickest way out of Manchester?

Overall a powerful, if disturbing, book that will remain with you long after you finish it.