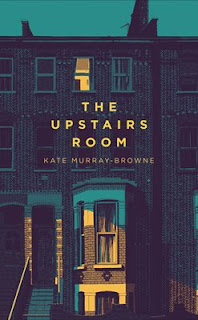 I'm grateful for an advance copy of this book from the publisher.

It was there from the beginning...

The Upstairs Room successfully marries the grammar of classic horror with a very modern story of restless, slightly over privileged adults toying ("struggle" would be putting it a bit strongly, I think) with the dilemmas of work, sex, childrearing and - the great topic of the day - house prices, in an up-and-coming part of London.

There's no view of the wider world, of diversity, Brexit or (barring a pervasive background of student debt) poverty. Rather the world is focussed down upon one particular house, the house Richard and Eleanor, with their two young children, have taken on. The reader is aware from the start of this dichotomy, of the real challenges that the characters face in their world.

Because the house Litchfield Road is a dispiriting place. Murray-Brown has a knack for unsettling with the ordinary, piling up the details of a house sticky from being over-lived in, full of someone else's dubious furniture. Like putting on someone else's unwashed clothes, there's a sense of unease, a sense the house isn't empty. And that's before strange things even start to happen.

Murray-Browne is clear from the start - though her characters don't know - that some of these things aren't mysterious at all. Living in the basement is lodger Zoe (a wonderfully realised character, slightly obsessive, drifting through life, not really wanting to be entangled with another boyfriend (except when she does) but missing the the sex the last one brought) and one subplot of this novel focuses on the way that Zoe invades Eleanor and Richard's space, and the way he invades hers. There are some really creepy moments as he prowls her rooms while she's out. As a result, things are left out of place, and noticed. Does this explain all of the mystery, all of the unease? Murray-Browne isn't clear, but I'd say probably not.

Is Richard obsessed with Zoe? Perhaps. Does that drive the plot? Not really. Like many themes it's there, but we never, perhaps, glimpse the edges or quite fathom the depths. The same is true of the girl Emily, the previous occupant of the upstairs room itself, about whom we learn a little, slowly, but never everything. (I'll come back to Emily in a moment).

Indeed, much of what we are told in this story - in agreeable digressions ranging back over the earlier lives, especially the love lives, of the central characters - isn't directly about the present day story at all. What it does do, though, is establish the odd trio - as well as Zoe's shifty maybe-boyfriend, Adam ("She liked sex and she liked being in his flat more than in her own and she liked the way he touched her hair. She just wouldn't particularly want to go on a long train journey with him") - as curiously, well, stuck people. They are all trying to be something, with varying degrees of success (of success in realising themselves, that is - Richard and Eleanor are quite successful in worldly terms, though still crushed by the burden of buying and doing up a 4 bedroom central London house). In a sense all are people who have drifted into their current lives, relationships, jobs, and making little progress in setting their own direction (Richard's ineffectual MA studies counterpoint the narrative). It creates a claustrophobic atmosphere: the stickiness of the house could represent a metaphorical stickiness, as if everybody here is stuck down by flypaper in an elaborate trap. There is no initiative. Moving into a dilapidated house, Richard and Eleanor - especially him - meant to clear it out and renovate, but, despite endless planning, almost nothing happens. Even the squalid old furniture is retained. Maybe that green wallpaper really is arsenicated, is really acting like flypaper?

Richard's MA founders, Zoe plays at being a writer but regrets walking out of her office job to work in an art shop, Eleanor suffers debilitating headaches and nausea in the house and feels as though she isn't quite there, and the children begin to act oddly. Is something sapping the will, undermining the inhabitants of the house - or is this just the logic of their lives?

The book is nicely written and contains some sharp observations on middle-class life ("Rob keep wanting to do things like go to the theatre and they did a couple of times, but it really fucked up your evening") ("You make money teaching people how to make money as an artist?") as well as ranging over an impressive gallery of characters besides the main three (or four) - my favourite was Laura, Zoe's self consciously Bohemian friend (and there is some history between her and Zoe that's never quite brought into focus but I'm sure is key to understanding Zoe) but Richard's ghastly parents are also fun, in a perverse way.

It is, in the end, an entertaining, knotty story, albeit one that perhaps takes a little while to get under way: for me the pace of reading picked up around a third of the way through and then the pages flew by. The exact boundary between the ordinary and the supernatural is never mapped out, attempts to address it resulting in failure, with only partial explanations offered, focussed on the unfortunate girl Emily. This was one aspect I felt was a little lacking. When Emily appears - and like other features of the book, her history is tantalisingly vague - I was expecting to hear she'd been diagnosed with autism (my daughter has autism, and I recognised this straight away) and that she and her family were receiving some support. When this didn't happen I wasn't sure whether to take this as a deliberate feature, a sign that they were exceptionally disconnected from the modern world - stuck, perhaps, like Richard, Eleanor and Zoe - or whether this was simply a slip in the otherwise excellent writing and research.

I don't want to dwell too much on that one point, this is a fine, unsettling piece of modern horror which engages us with its - not always sympathetic - characters and makes them genuinely interesting. I think Murray-Brown's eye for character, and ear for dialogue, are exceptional and I look forward to reading more by her soon.