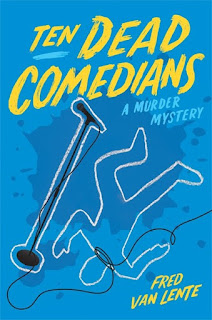 I'm grateful to Quirk Books for an advance copy of this.

Ten Dead Comedians is an ingenious and entertaining take on Agatha Christie's well-known mystery And Then There Were None (successfully dramatised on BBC TV at Christmas 2015). (This was the story that was originally published under a different title, unquotable today although closer to Van Lente's).

Basically, ten guests are invited to a remote island by a mysterious patron. They come because they are led to expect some benefit: they stay because escape is impossible - and one by one, they die. We know all that beforehand, and if we've read Christie, we may also think we know why this is happening and what the outcome will be.

The questions are, who is doing the killing and why, and can any of the guests survive? As that is unravelled we learn more about each guest and their history and why someone may wish them dead.

Van Lente has perhaps put himself at a disadvantage because so much is known or may be inferred from Christie's work, but of course he has also given himself the option of either confirming her structure or undermining it. And he claims another advantage by making his collection of mostly unappealing guests comedians. A problem with this template for a book is that you have ten main protagonists. For the reader to "get" the book they need to be well realised, and quickly. The comedy angle gives an immediate way in because by including or describing their various acts, Van Lente can sketch his characters very efficiently and effectively. In other words the presence of the comedy material - in very different forms - isn't just a fun bonus to this book, it's an integral part of the narrative (as well as being very funny).

More, by using the comedy to set up tensions between the protagonists Van Lente makes his Murder Island almost a microcosm of society - from the cultured, entitled comic cynically playing a redneck bigot to the New Age "Orange Baby Man" who has found release from a lifetime of bullying to the radical podcaster to the taboo-breaking young woman comedian who's smuggled a friend onto the island. It's a more diverse group (in every way) than Christie's original (although she wasn't completely blind to class and gender tensions either).

That's all very well, but a book like this could still fall flat if it didn't have a sense of mystery - and if Van Lente wasn't adroit enough at both embodying and undermining Christie's plot. I'm glad to say he does well on both scores and, while much of the enjoyment in this book is in the character development and interaction, there is a genuine sense of menace and a genuine mystery about why the murders are happening and who is responsible. You'll have to look closely to get any clues (though they are there).

So - a smart, rather unusual, book that manages to be both funny and bleak but never less than absorbing. Ideal for a summer holiday.

Though not, perhaps, one on an exclusive Caribbean island.
Email ThisBlogThis!Share to TwitterShare to FacebookShare to Pinterest
Labels: 2017, crime, islands, Murder, Quirk Books