Review - The Management Style of the Supreme Beings by Tom Holt 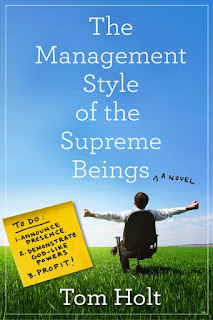 TMSOTSB is a fun comedy fantasy somewhere along the Adams-Pratchett axis, focussed on what happens if God/ the Gods were like business execs, operating their divine realms for profit. In the way of such fantasies, it doesn't do to think too hard about the details (in what currency would such transactions be settled?) but the concept gives Holt plenty of scope for humour and, indeed, for some musings on morality, character and the foibles of the human race.

The title is, though, perhaps slightly misleading. I was expecting (as much from the cover - which feature Post-Its and an office chair in a field - as the title) a riff on all those "Who Moved my Stapler?" and "Management in Six Seconds" guides you see in railway terminus WH Smiths. (Who buys them?) - only with God/ the Gods as fodder. There's surely enough in the doctrine of any organised religion to draw on.

The book is nearly that, but not quite (in the sense it's a bit more than that, not of it falling short in some way) That's probably just as well because I think the joke would pall fairly quickly. Instead it examines what happens after God (in the Persons of Dad and Jay - Uncle Ghost is somewhere out of sight) gets fed up and sells off the family business to a couple of hard-nosed investors, the Venturi brothers. So there's a corporate theme, but it largely drives the plot rather than the book simply making fun  of management guff.

You see, Jay, the Son, doesn't really want to sell, and the Other Son, Kevin, really really doesn't want to sell - cue Kevin's misadventures as he refuses to leave Earth and begins to struggle against the Venturis' new system of pay-as-you-sin. This system seems very effective at stamping out crime and wickedness, but doesn't actually make anyone very happy - and there, as we follow Kevin and a motley collection of allies (Bernie, Satan's indispensible human sidekick and COO of Hell, Indiana Jones style treasure hunter Jersey, Lucy, who was sacked from Heaven's helpdesk and Jenny, Bernie's succubus secretary), is the motivation for a rebellion. But who can face up to the all-powerful Venturis?

It's interesting that, as with earlier writers, Holt seems to find it easier to write about Hell than Heaven. Due to some sleight-of-plot, when the Venturis take over Earth, Hell is maintained for legacy souls and there's quite a lot of fun in the descriptions of how the various departments rub up against one another. There is though no comparable vision of Heaven even though the same logic would suggest there should be. Goodness just isn't so interesting to write about - which may be why the depiction of "Mr L" is so rounded while Dad, Jay and Uncle Ghost just seem like a bickering group of guys in a sitcom. Which is not to criticise the book at all, it could hardly be expected to top Milton.

All in all, the machinations of our rebels, of the Venturis, Mr L and, to a slightly lesser extent, "the former owners" make for an entertaining book with plenty of laughs and a few groans. The text is peppered with allusions to, quotes from, misquotes from and scramblings of the Bible ("the user manual") many making quite sophisticated points about the text itself and human (or divine) nature.

It's in many ways a growing up story about Kevin, that previously neglected aspect of the divine who comes into his own when his betters do something very silly.

At the end, a few questions still remain. Why did everyone hate Father Christmas so much? And in exactly what way is Holt's portrayal of the Trinity heretical? (It has to be heretical, almost anything you say about the Trinity is: I thought it might be Docetist perhaps, or Monophysite but I'm not sure).

Overall a fun book - I'm slightly surprised it's being published in the summer as it seems to me to be eminently suited as a Christmas present. Make a note, and when you've checked your list twice, perhaps you can bestow a few copies on friends and family come December.