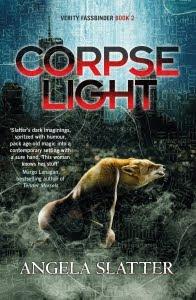 I'm grateful to the publisher for an advance copy of the book and for inviting me to take part in the blogtour.

Verity Fassbinder, introduced in Vigil, is part Weyrd (on her father;'s side - her mother was a Normal). So she can duck in and out of both Brisbane's, er, special and its mundane populations, as comfortable dealing with one of the Norns (they do a mean latte) as with a police officer. This is useful since she's employed to keep order in the Weyrd community and prevent their existence becoming too widely known.

Verity is a noteworthy character, a woman who willing to keep a godslaying knife that's the property of the Boatman (he who carries dead souls to oblivion) and to face off with a rogue angel. But she still has a home life to manage: there are complications in this book because she's now heavily pregnant and begins to give birth at a key moment. Slatter successfully combines the details of parenting a new born baby with Verity's monster-hunting career, creating some humour on the way (the detail of Verity's breast pump!) but also prompting her to reexamine her own difficult relationship with her parents. (I say "difficult" - in fact V's mother disappeared and her father was subsequently discovered to be a butcher, serving up children as meat to the more traditional of the Weyrd). Naturally, when Verity wonders, she acts... and we learn rather more about her family background than we previously knew

Which is just as well.  Amidst Verity's focus on her own newly enlarged family, as well as her search for the person or being who's drowning random strangers on dry land and engulfing a nice lawyer's house in mud, that past suddenly poses very urgent questions. And it isn't just about her. Verity learns new things about her closest associates too. It's spectacularly badly timing, just when she needs to concentrate on other things, but life's like that in Verity's world.

I really enjoyed this second book in the series, possible slightly more than the first (which WAS great mind you!) The setting and characters are now firmly established, and Slatter has scope to go a bit deeper and confront V with some real challenges - challenges that can't just be settled with a knife, however epic a knife it may be. We see her under pressure, and we see her having to think on her feet.

Most of all, though, we see her cool, shrewd, never short of a pithy remark or thought ('Mummy spit for the win", 'Afternoon tea was being served - because what is a council of war without the beverage of the Empire?', 'Your heart is in a Hello Kitty box?') and we see her refuse to lower her standards or compromise. That moral core is something very special in Verity's world, I think, and it helps define her character and make her almost like the hero in a noirish thriller: walking those mean streets although she is not herself mean. (Though Slatter gives Verity stable relationships rather than the raddled life of the over-committed detective - she's a rounded character not a cliche.)

It's a most enjoyable and slightly unusual UF, with lots of scope for more (Verity on a Quest) as well as more to learn about her background and associates. A good followup to Vigil.

For more about the book, see here.

You can buy it at your local bookshop or here, here or here. 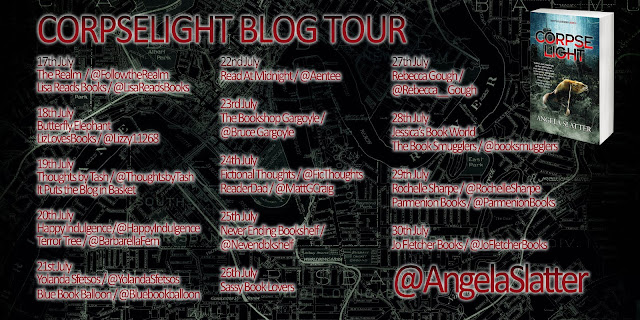