Review: Under a Watchful Eye by Adam Nevill 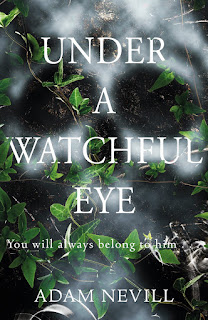 Seb Logan is being watched. He just doesn't know by whom.

When the sudden appearance of a dark figure shatters his idyllic coastal life, he soon realises that the murky past he thought he'd left behind has far from forgotten him. What's more unsettling is the strange atmosphere that engulfs him at every sighting, plunging his mind into a terrifying paranoia.

Imprisoned by despair, Seb fears his stalker is not working alone, but rather is involved in a wider conspiracy that threatens everything he has worked for. For there are doors in this world that open into unknown places. Places used by the worst kind of people to achieve their own ends. And once his investigation leads him to stray across the line and into mortal danger, he risks becoming another fatality in a long line of victims...

Under a Watchful Eye is at first sight a return to a more conventional sort of horror than Nevill's last novel, Lost Girl, where the supernatural was backgrounded. In many ways though, Watchful Eye builds on the atmosphere of the previous book, featuring as it does a raddled, stinking and emaciated shaman-type who has purchased dreadful knowledge at a fearful cost, and a murky sect trucking in such knowledge. There's also a seaside location, with the horror made more fearful by its contrast with the clean natural beauty and (in places) daintiness of the South Devon coast.

The book opens in a very conventional, almost MR Jamesian way, with the appearances of that dark figure, seen only in glimpses or from the corner of an eye. The figure seems to be getting closer and to be inducing animation in Seb's surrounding - in a flapping bit of laundry or a sun umbrella - that are suggestive of something with intention (I won't say, "suggestive of something alive").

Soon, Seb begins to relate all this to a former flatmate from his university days, the dishevelled, drug using dropout Ewan Alexander who haunted Seb's earlier life, drawing him into a smelly, tawdry life among bags of rubbish, unwashed clothes and mouldy walls. A student life, perhaps, dialled up to eleven. Alexander has turned up from time to time seeking money or help and despite all of Seb's protestations, clearly speaks to something from his younger days. So when Ewan does turn up it's not a surprise that Alex doesn't immediately shoo him away but listens to the man hauling two stinking binbags full of crazed, mystical scrawlings which he wants turned into a book.

Seb is, it happens, a successful horror author - though clearly one more conventional than Nevill himself as he remarks later in the story that he couldn't have conceived of a plot as weird as what happened to him.

At one level it's a familiar enough kind of story, as the horrific reaches out into the holiday sunshine of  Devon and lays its grimy fingers on Seb, drawing him back to darker places and showing a terrible reality behind the bright days and salt breezes. Ewan Alexander got involved in something truly dangerous and dark and now it seems to be infecting Seb, as he first starts to doubt his sanity then realises he has a much, much worse problem. As he begins to cut himself off from his (admittedly few) human contacts - a girl who seems to fancy him, his agent - other, shadier figures start to take over his life - until finally, a proposition is put to him - a proposition he has no choice but to accept.

By now we've long left behind the Jamesian antiquarian harassed by clean, straightforward monsters and we're into a a fringe world, inspired partly by '60s theories of expanded consciousness, part by '20s charlatans and showmen. All harmless fun and games until someone loses an eye.

Nevill has a real talent for conveying true, gripping malevolence, not least by reflecting it in the seamier corners of the modern world: "A hint of gas blended through raw sewage. The must of ancient dust under floorboards, mingled with what dirty shoes had left on carpets, where they existed. Cat piss despite there being no cat..."

Always the smell of unwashed bodies, that sticky dust - not the wholesome, hallowed dust of ages from a church or manor house but greasy dusty, dust that infects and in its motes, rises to engulf and stick to you. This is the atmosphere that Ewan brings back into Seb's neat, clean modern house. Later in the book, a suggestion is raised that Seb is - in his latest book - working through issues about cleanliness and the body by writing in this vein, I think it's brave of Nevill to plant the seed of that idea in what may be seen as a partly autobiographical book - featuring as it does, a writer (for Pan!) writing a horror book at the same time as investigating another author of fringe horror.

I'm sure Nevill isn't saying here that he's ever been hooked in by a bizarre 60s ere cult. But you do perhaps get a sense, reading this, of how dwelling among imagined horrors - if only for the sake of writing a book - can prey on the mind. I recall Nevill having said of his last but one book, No One Gets Out Alive, that writing and researching it took him to some very dark places indeed. If the essence of SF (and I'd add fantasy and horror to that) is to take a metaphor and make it actual, then perhaps that's what is going on here with the domination of a horror author by the truly evil.

Under a Watchful Eye is a compelling piece of horror, excellently written and hitting that sweet spot (or in the case of this book, perhaps, foetid spot) between having to know what happens next and not daring to look. I haven't said too much about the later parts of the book because Nevill is playing some clever games here too, which only add to the mood and the implied commentary on horror writing. But you might pay attention to the chapter titles...
Email ThisBlogThis!Share to TwitterShare to FacebookShare to Pinterest
Labels: 2017, Adam Nevill, horror, review, Under a Watchful Eye