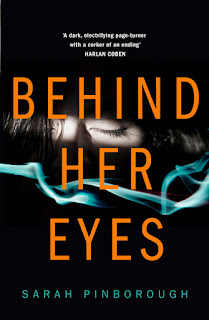 I may be a teeny bit biased when it comes to Sarah Pinborough's books - I have yet to read one that I didn't enjoy. But really. You have to read this book, just do. I'm going to be nagging everyone to do that and you may as well give in sooner rather than later.

Not only is it Pinborough at her very best (and that's something in itself) but it's Pinborough leaping and vaulting over genre boundaries, authorial conventions and the reader's sense of where the book is going. You may think you're got it sussed, but you haven't. Not for nothing has the hashtag #wtfthat ending been going round.

Which sort of makes it hard to review. I'm generally not precious about spoilers but - for once - I really, really mustn't say anything about the ending. Beyond, perhaps... no. Nothing.

Begin at the beginning then? It opens with what might almost be a spell:

Pinch myself and say I AM AWAKE once an hour.

Look at my hands. Count my fingers.

Look at clock (or watch), look away, look back.

Think of a door.

What's going on? Whose spell is it? What do they want?

This is the story of Adele, of David and of Louise.

David, who denies Adele a phone or credit cards, and has control of her money. Who seems himself desperately unhappy. Stressed. But controlling, in charge. Who moves the household from one place to another, changing jobs, sloughing off friendships.

And who fancies Louise.

Insecure Louise, still smarting from her divorce, a bit heavier than she'd like, devoted to her six year old son, ready for a little love or even just some tenderness.

It's also the story of a girl and boy in a lonely institution. Of the mind games and cruelties that people play on each other when they think they are in love, when they want things, when they are afraid. Of the lengths they'll go to.

It's a psychological thriller, very much so. But. If you've read Pinborough's last two books there is a sense in which it's the natural outgrowth of, a sort of thematic sequel to, both The Death House and 13 Minutes.  The flashbacks show a deep understanding of the younger versions of the characters and while the "now" parts are more adult-focussed, the truth of what's going on rests very much on how those people were formed, who they really were and as in those stories, Pinborough infuses naturalistic settings and real - oh how tangibly real - people with a delicate sensibility of horror. Like a little speck of blight in the perfect rose, or the whiff of death in a still life. Remember that thou shalt die.

Which I think distinguishes this story from the currently popular 'grit-lit' of the The Girl who did the Thing type. Yes, there is psychological tension here, by the bucketful. David - controlling, watchful, but desirable. What's his real agenda? Adele - well, we see her point of view, she tells us she's up to something but it doesn't quite make sense. Is she the victim, trying the regain her freedom? Or the villain? Does she want revenge? For what exactly?

And Louise - what's her game? Is she really Adele's friend or will she betray her with David?

Together these three wheel and leap through the story like gymnasts. The reader is never quite sure what to expect. Louise is the one who sets herself the task of solving the mystery: she feels that only by understanding Adele's and David's past can she understand their present and free herself from them. She's helped by a battered notebook - but we, the readers, know more than her as tricksy Pinborough gives us both Adele's thoughts and the occasional flashback. It's all about viewpoints, I think, the past seen through different pairs of eyes.  And information: who knows what about who, and when. Towards the end of the book one character compares things to a jigsaw puzzle that's about to be completed - but that's optimistic. These pieces keep changing shape and colour.

If that all sounds a bit clever-clever, don't worry - this is more than a pacey thriller, but it is, also, a very pacey thriller. From that first page, it casts its spell (Pinborough's also done some compelling versions of classic fairy stories, and it shows) and the reader - well, this one - just has to keep on, sympathising by turns with Louise, Adele and David: wary by turns of Louise, Adele and David, baffled at what's happening, but knowing, just knowing that there's stuff bobbing under the surface.

And praying it's just a lump of weed, not a putrid corpse.

This book remained in my thoughts long after reading - it's not so much (or not only) what happens in the story, but what you realise will happen after.

Creepy as hell, and simply brilliant.