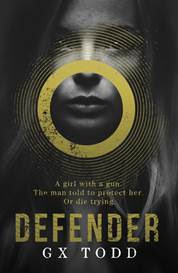 What if the voice in your head didn’t belong to you?

What if it had a purpose of its own?

And if it asked you to kill. Would you?

This is the story of 16 year old Lacey and of Pilgrim, a man who stops his motorbike one day at her lemonade stall and agrees to do her a favour in return for a drink. Together they leave Lacey's cosy house and set out on a trip to find Lacey's sister and niece.

So begins a book that will, I think, beg comparisons with post apocalyptic masterpieces such as The Road. In Lacey and Pilgrim's world, Voices appeared seven years ago. Whispering their sweet corrupt stories into human minds, they provoked sprees of sabotage, murder and suicide, quickly bringing civilisation down. All that's left are scavengers rooting through the detritus - and hunters, preying on the weak.

So Lacey's decision to leave her house with Pilgrim is a great act of trust, reminding me of Robert C O'Brien's haunting Z for Zachariah in the strength and tension of the central relationship as well as in the resourcefulness of Lacey and of Alex.

It's not a book for the fainthearted. Apart from the grimness of a ruined America - burned out shopping malls, corpses stacked up in heaps by the side of the road, dogs roasted whole and unskinned, grim accounts of the killings brought about by the Voices - there is some pretty direct and horrific violence from those human predators, who are ready and willing to capture, torture, use and kill anybody they take a fancy to.

And, in turn, from Lacey as she is forced to defend herself.

As if that isn't enough, Pilgrim has a Voice....

I just loved this story. Lacey, especially, is a fantastically well realised character and her relationships with Pilgrim and with Alex, a woman they meet on their journey, are well portrayed. That with Alex is especially well written and tender, but the writing is of a high standard overall, whether describing a costly battle, the transition from desert scrub to the greener land by the river, or a magnificent ruined city which Nature is quickly reclaiming.

Here's a scene that readers everywhere will connect with, I think. While on the run, Pilgrim has stopped the team at a library to look for books. He doesn't know which ones, but he'll know them when he sees them .

Lacey is aghast: "'You're kidding me, right? You don't even know which books you're looking for?'"

Pilgrim is relaxed. "The mustiness of old books wafted out to greet him, and he inhaled deeply..."

I think we've all been there...

Todd manages to move between little moments like this, extreme violence, and the developing relationship between the characters without missing a beat. She also begins to drop hints of a bigger purpose behind the Voices - and some of their hosts - which I'm sure will be revealed in future books - something to look forward to!

At times, perhaps, Lacey seems to know a little too much for her age and upbringing - raised from age 9 by her grandmother in an isolated house, she's been sheltered from much of the destruction but also from much of modern life, so I think she is occasionally used to provide context she wouldn't have - but that's a small point really.


Overall, this is a great read and promises to be the start of a wonderful series. A superb debut novel.
Email ThisBlogThis!Share to TwitterShare to FacebookShare to Pinterest
Labels: 2017, America, Defender, GX Todd, Post Apocalypse