If you're sharp eyed you may spotted that my avatar has changed.

I originally named the blog Blue Book Balloon after my Twitter (or the Twitter handle after my blog... to be honest I forget which came first). Either way the name arose when one sunny Sunday afternoon we heard a roaring sound in the sky, looked up, and saw this balloon floating by. 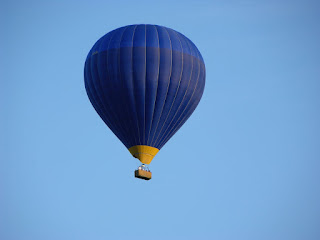 Something about it appealed to me - the blue sky, the blue balloon - and I adopted it as an avatar. I've since then used the pic so many times - it's been cropped, resized, converted, uploaded, downloaded that I'm not even sure the one above is the original photo, though I think it is.

In any case, the version on Twitter was distinctive enough to attract the attention of local balloon enthusiasts, one of whom knew who owned the balloon itself. It was a bit embarrassing at first and I got some mistaken follows from people who assumed I'd be discussing weather conditions and the latest advances in lightweight burner technology but I think they soon realised it was mainly books.

Anyway, jumping forward a bit, this Christmas my wonderful family bought me this as a present. 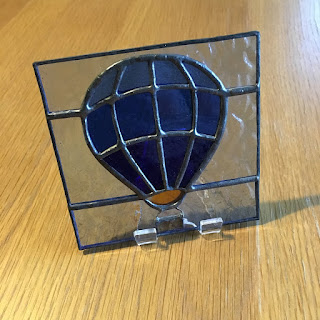 I should say commissioned, because this stained glass Blue Book Balloon is a one-off, specially made by Purple Urchin stained glass. We have bought various pieces from Jackie before, including a Nativity set - they make distinctive ornaments and lovely presents. (Her studio is open during Oxfordshire Artweeks if you're passing this way when they're on).

So - I've updated the various places where I use the balloon to identify myself - my Goodreads, my Twitter and this blog - and generally spruced things up for the New Year.

Well, it's better than a fitness programme...