Review: Wake of Vultures and Conspiracy of Ravens

I'm grateful to Orbit for a copies of both these books.  I'm, unusually, reviewing them together here - inevitably that means some spoilers for Wake in the Ravens review so stop reading at the first review if you want to avoid those.

Nettie Lonesome lives in a land of hard people and hard ground dusted with sand. She's a half-breed who dresses like a boy, raised by folks who don't call her a slave but use her like one. She knows of nothing else. That is, until the day a stranger attacks her. When nothing, not even a sickle to the eye can stop him, Nettie stabs him through the heart with a chunk of wood and he turns to black sand.

It's a Western. It's fantasy. Its protagonist is a kind of alt-reality Huck Finn, escaping from a brutal childhood and embarking on a series of adventures across a harsh, unforgiving landscape. It's The Lone Ranger or Zorro for the 21st century. It's all kinds of things, but Wake of Vultures is, most of all, utterly, utterly wonderful, readable and addictive.

Nettie - or Rhett, as she decides she'd rather be (the name changes several times as he flees from possess monsters and worse) is escaping near slavery, as a mixed race Native American/ Black orphan brought up on a desolate ranch in the 19th century in what would be Texas in this world (nearest town: Gloomy Bluebird). It's a world stalked by vampire saloon girls, dwarf miners, harpies, Sirens, the terrible Cannibal Owl itself and more. Rhett enthusiastically takes on these threats: after all, at the start of the book he's been hurt much worse by his treatment on grounds of race and gender and (potentially, if he's caught out) gender identity (to use modern terms which don't actually appear in the book, even as it confronts these subjects square on).

All the elements of a classic Western are here: cattle rustling, the glittering desert, "Injuns" (sympathetically portrayed: Bowen admits in a note at the end the difficulty of using language which risks either being wrong for the setting or disrespectful to the modern ear), seamy saloons and a dubious sort of instant justice. But there's more besides: Rhett is a magnificent creation, a girl (at the start) who takes his own fate and his own nature in his hands, identifying as a man and living that identity in various roughneck settings even as he works his way through an awful lot of growing up. Questioning his upbringing, his own worth and his origins (and dealing with those pesky monsters) is a great deal to manage, but he confronts it with aplomb.

I was impressed at the way Bowen empowers Rhett (but also the ranger Sam) to claim suppressed identities and confront the racial and other injustices of the real Old West, acknowledging and subverting the brutal reality behind it. At the same time Bowen's not afraid to use classic fantasy tropes: the prophesy, the Child Who Lived, raised in humble surroundings but (perhaps?) with a great destiny (there's a touch of Harry Potter here even in a story which has much darker and more realistic themes). I thought that actually grounded the story: strange though it may seem, that framework, the quest to destroy a monster, worked very well in the parched-desert-and-hostile-wilderness setting. It's worlds away from the classic Northern European fantasy (fur cloaks and snow) while the Western setting still gives the same sort of lawless environment and the same scope for a quest - having escaped Gloomy Bluebird and joined up with the legendary knights, sorry, Durango Rangers, Rhett sets out to confront a great evil, risking his newfound freedom - and in one powerful scene, identity. (And I wouldn't be surprised if a dragon or two turns up in the series one day).

Oh, and it's a rattling good read too, the sort of book that's best read in one or two sittings: every chapter ends on a cliffhanger (literally, in one case), there's a relentless drive to the central quest and the sense of peril and jeopardy mounts remorselessly. The end runs seamlessly into the next story (so, tomorrow really IS another day...) which promises even greater things.

Overall, a great addition to the genres of both the weird Western and of modern fantasy. Strongly recommended.

Look away now if you haven't read Vultures and don't want to see some mild spoilers. 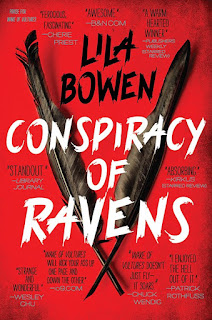 Ravens picks up right where Vultures ends, with Rhett transformed again into... something and literally leaping to freedom. He's now adopted the identity of The Shadow, legendary defender of the weak, but it takes time to come to terms with that and inevitably the immediate subsequent pages lose some of the tension of the previous book which has just worked up to a climax - Rhett must journey in the desert to explore his new identity (or identities) and learn some painful lessons, including on gratitude.

Indeed one of the attractive qualities about Rhett is that he's far from perfect, too inclined to lash out, perhaps following a less that ideal model of what being a man is: but he learns, he tries to do better, even amongst the monster chasing and questing.

And he's oh so brave and handsome, charming the socks... and other things... off both men and women, which adds a certain tension to camp life. Indeed there's almost so much going on here as to risk our losing sight of the ultimate objective, but that doesn't happen because the new quest here is brought by an Irishman, Earl, who's sometimes a donkey but is never less than focussed on rescuing his brother.

In his aspect as The Shadow, Rhett can't but offer assistance and so the pursuit begins again, as he and his posse set out to kill a sinister railway boss who has a whole camp enslaved and is gradually harvesting them for body parts. It's him who commands the ravens of the title and fantastically creepy servants they are too.

Again the pace is relentless once this pursuit gets going, with many obstacles to be confronted on the way - a cruel beast-show proprietor, the corrupt Rangers of Lamartine and a mysterious horned creature. Some of these encounters impose a real cost, immediately or later on, but Rhett doesn't flinch throughout.

Compulsive, page-turning stuff, if anything even more compelling than Vultures and as before, Bowen leaves the book in the middle of the action with the reader - well, this reader - wanting more.