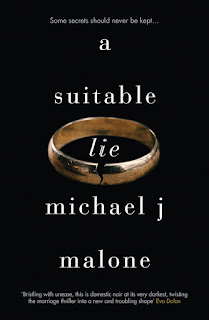 I'm grateful to Orenda Books for a copy of this book.

Towards the end of A Suitable Lie, the central character, Andy Boyd, who's been tormented for years by his abusive wife Anna, finally cracks and seeks help. He calls a women's DV helpline and is met by a tirade of abuse and threats to call the police. Boyd understands: the woman who answered him deals every day with the results of abuse by men, and abusive men are by far in the majority.

So this book - about abuse of a man by a woman - poses a question. Shouldn't the focus be the other way round?

Part of the answer is, I think, that looking at one problem doesn't mean you're not also concerned with the other. The deeper answer might be, where do the roots of this problem lie and how can attitudes be changed?

Andy is, it soon becomes clear, something of a man's man. Widowed (with one son) several years before, his milieu  is the Rugby Club and especially, the club bar: when he gets married again he enthusiastically takes part in a rowdy stag weekend, and the hopes he confesses for fatherhood include a cast iron assumption that his (by then two) boys will play football for their school team.

Malone's achievement in this book is to show how that unexceptional, probably typical masculine characters lends itself not to being abusive (attacking a woman is a line Andy vows never to cross: he's not so restrained with men, at least not after drinking) but to being made a victim.

After all, he's a big, strong man. To admit that his wife assaults him - and that he can't control her - would be shameful. It must be his fault. He is, as she continually tells him, a disgrace, weak, not a real man. he won't tell anyone what is happening: not his brother, his mother, or any of his friends (from whom Anna soon sets about estranging him anyway in a classic abuser tactic).

Most of all, he's got to hide it from himself. After all, he loves Anna. He has to protect her, so it's up to him to make things work and if he can't then he's falling short and surely deserves her treatment of him.

The book is then a study in the corrosive effects of masculinity not just for women but for men as well - illustrated by a subplot involving another character whose fear of exposure leads to trouble for himself and for Andy. All those secrets, all those suitable lies, have a cost.

It's not, at times, an easy book to read: the descriptions - especially - of the violence are pretty graphic, and it includes sexual violence. At the same time nothing here is gratuitous indeed I suspect it's still probably toned down compared with reality.

While I found myself slow to warm to warm to Boyd as a person - I see myself as very unlike him - his slowly developing plight is quite heartbreaking: manager of a bank brach in a small West Coast Scottish town, he's a respected figure in the community and has lived an uneventful life, made no enemies (that he knows of) and just wants a woman to share his life and be a mother for his son. Obviously he's prepared for change after marrying Anna and part of the realism of the book is seeing him negotiate that - or expect to - and only gradually coming up against the reality of what she is.

Even Anna evokes sympathy, when she describes her chaotic childhood, which it's pretty clear has led to her being how she is. But that only underscores the urgency of Boyd's dilemma, as his boys begin to play out the same dynamic that they observe between their carers.

An excellent book, if sometimes difficult to read: strongly recommended.

Thanks to Karen at Orenda Books, I have a signed copy and a free audio download up for grabs! To enter, either comment below on this post or retweet the review, tagging me in (@bluebookballoon). I'll choose winners on Saturday 5 November. 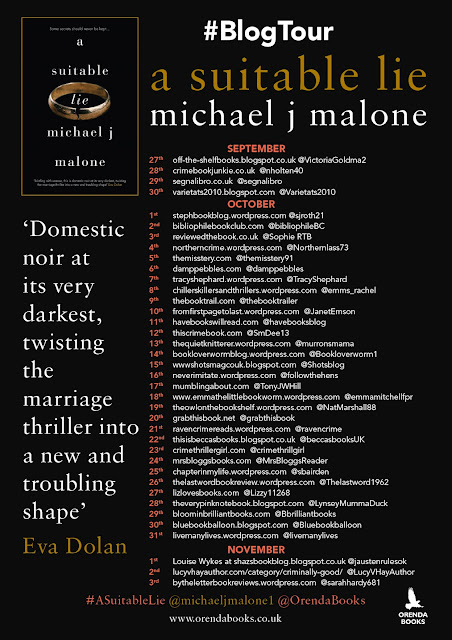