Blogtour review - The Mountain in my Shoe 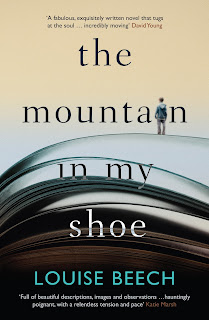 I'm grateful to Orenda Books for a copy of this book.

I have to say I'm not always as organised with my reading and reviewing as I should be. I left this one rather late, starting it on Friday night (21st) with a deadline of Monday (24th) to review as part of the blogtour. Would I be able to finish in time? One never quite knows how long it will take to read a book, sometimes the story doesn't take off...

In fact, the opposite happened and I pretty much read it nonstop (missing Strictly last night) and here I am reviewing on Sunday morning. It's not so much a book you can't put down as a book that won't put you down. Thrilling, heartstopping, tearjerking, sad, happy - this book is quite simply a journey, and a journey you have to take. 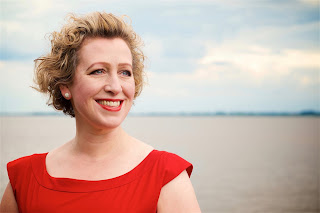 The title is an allusion to something Muhammad Ali said: "It isn't the mountains ahead to climb that wear you out: it's the pebble in your shoe". Ali is something of a lodestar to Conor, the boy at the centre of the story. Taken into care at birth, Conor is looked after by a succession of foster carers, homes and social workers, documented by entries in his "Lifebook", a record - and an explanation for his older self - of significant events and changes in his life. Many of these are deeply sad, indeed some brought tears to my eyes. It isn't so much that bad things happen - though they do - but the good intentions of all concerned that still can't manage to provide a boy with the comfort and stability he needs in his little life. Beech is to be congratulated for conveying this so movingly (but never mawkishly).

But this isn't just a social tract. It's the loss of Conor's Lifebook that sets the action going. It coincides with Bernadette - who has a place in Conor's life - deciding to leave her abusive and controlling husband, Richard. (Beech is also good at encapsulating Richard's personality and behaviour even though he's not a central character for much of the book: the incidents described are chilling as is Bernadette's realisation that she has been accepting them, hoping for better and still loving him). Bernadette's plans are upset when Conor disappears, and she and Anne, his foster mother, set out on to find him, an unforgettable 24 hours which will change the lives of all three.

I was struck by the repeated, haunting imagery here of disaster, loss and isolation: the foghorns heard from the nearby River Humber, Bernadette's interest in survival stories (mirrored on her bookshelves) and her own loneliness, trapped in a marriage with Richard (unable to drive she is forced to take taxis to get about and is expected to be at home every night to produce his meal). There is a sense in which her life is closed in, restricted and narrow, paralleling the endless rules that apply to Conor - who he can and can't see, where he can live, all set out in the book. In both cases it's supposed to be for the good: Richard presents himself as protecting and supporting Bernadette and knows every last detail of her life - or thinks he does - while keeping secrets of his own.

Beech's writing is terrific - the more so for the way half of it is done through summaries of official documents, reports and assessments - and the characters believable and so human. The best is certainly Conor himself, where the writing shows deep insight into what it is like to be wounded at such an early age - and how that isn't something that can just be fixed with a fairytale ending.

It all blows up on that dark, cold night, when Conor and Bernadette are set adrift, as it were, to sink or swim in wholly new circumstances.

This is a powerful book, deeply readable, the kind of book that changes the reader. Please do give it a try.

You can buy The Mountain In My Shoe at your local independent bookshop (obviously, this is best if you can manage it) or here, here or even here.

Next stop on the tour tomorrow is at Neverimitate. For other reviews and background on the book, see below. 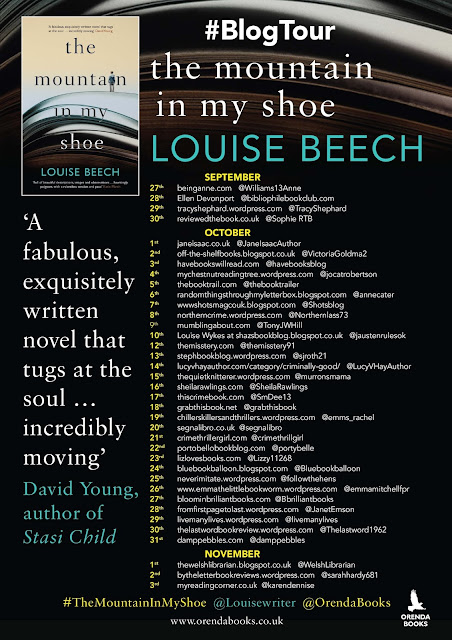