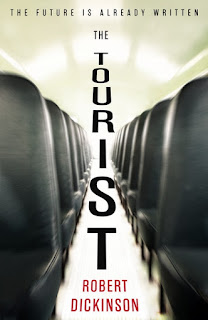 The Tourist
Robert Dickinson
Orbit, 20th October 2016
HB, 283pp
I'm grateful to the publisher for an an advance copy of this book.

The future is another country: they do things differently there.

Spens is a tour guide, shuttling visitors around an unnamed northern town in 21st century England. While they spend most of their time in the private "resort" (a domed hab - think of Center Parcs only much more so) to which they've travelled directly, the clients also want to see a bit of the country, fascinated even by mundane trips to the shopping mall or the promise of a minor road accident.

After all, the clients are from the 23rd century. Some way into the 21st there has been a "near extinction event" (NEE) which leaves civilization in a parlous state. Despite the ruinous effect of this - which are implied rather than described: people are afraid of being under the open sky, rain is dangerous, wild animals unknown and life hard - Spens's people have discovered time travel. The book takes this premise and runs with it, bringing in rivalry in the future between the "number cities" - to which Spens is affiliated - and a hostile place known variously as City Two East and Kat. This spills over into espionage and eventually, we may infer, war. It's very hard though to separate what is assumed to be already history (in some sense) by the characters in the book and the consequences of what they actually do.  It reminded me of something I once read, "time is nature's way of preventing everything from happening at once".

Much of the activity of Spens's people is devoted to recovering caches of vital materials that they've secreted in the 21st, before the NEE, and presumably dont have access to afterwards (for example they rely on adapted tech purchased in the 21st rather than having more advanced versions themselves). It's never clear whether the tourism is actually just a cover for this activity, which is central to the taut espionage thriller which the book becomes when one of Spens' clients goes missing. He has to decide whether or not to report this: his boss consults the archives - patchy records sent back from the 25th for reasons unexplained (the 25th are like that: a bit aloof) - and concludes that, no, he didn't report it - so he doesn't. Thus the thread of reality is spun - this is a relatively simple example of how characters loop back and forward. It's a bit like one of those Stephen Moffat wibbly-wobbly, timey-wimey episodes of Doctor Who where events precede causes and you'd value a diagram.

It is a compulsive read, but you have to either keep very focussed or just let it all wash over you. Or both. The book proceeds at a rattling pace, touching on drug trafficking and the deteriorating political situation in the UK with riots against the time travellers and a threatened military response by Spens's people against the past - their past - (is this conflict perhaps what brings on the NEE? Records of that are vague...)

At the centre the espionage plot involves a woman who, in (mostly) alternating chapters, begins (ends? normal tenses hardly serve) in prison back in the future but is then released to carry out a last mission. She, Spens, his 'Safety' Hayek (the security chief at the Resort) and a mysterious chap called Riemann weave in and out, crossing and recrossing each others' paths and setting up and resolving temporal paradoxes until the reader's brain almost begins to bleed. It would be difficult to give more of a plot summary than this because (spoilers aside) you'd have to decide first what order events happen in - and that depends on whose point of view you follow. I did a physics degree and spent a great deal of time working through the paradoxes of relativity - where the order things happen depends on who you ask - and that was hard enough to grasp, without time travel.

I had mixed feelings about all this. The typical conspiracy thriller can be baffling enough but at least you know - or can assume - that there is actually an answer, even if you don't discover it. Time travel brings its own layers of confusion. I've nothing against being confused, being in the middle of a book, thinking "hang on, what just happened?". Indeed, to a degree every book starts like that and many continue that way for most of the story. But for me there needs to be assurance that there are answers and stuff isn't just being rammed in as the author's mood dictates. At times, reading this book, I wondered. I think that in the end Dickinson sticks to the deal, he does explain what's happening and why, and simply leaves a healthy dose of mystery for the reader to take away (the airport scenes, for example, that mysterious sealed box that keeps popping up, and the role of "Geneva"). But your view may depend on your personal threshold for this kind of mystification.

If that all sounds confusing, read the book: it's great entertainment, if you accept the twin premises of time travel and that - it seems - everyone in this book is being manipulated by somebody else and we never quite find out what.

Throughout it all, Spens brings the story a touch of human tragedy. He is I think something of a sad figure. He lost his parents at an early age to an accident - details of which were then suppressed which seems to be standard practice - and wants nothing more than to travel back to the early 19th century to hear Beethoven's music. He falls into the events of this book through no fault of his own, trying to do his job scrupulously (unlike all the puppet masters and players around him) and still performs well as an investigator for Hayek, but he doesn't get any reward and certainly comes no closer to his dream.

A well written, and fun, high-concept thriller - but you might not get on with it if you like things clearcut and neat.