An Interview with Lila Bowen

Last week I reviewed Wake of Vultures and Conspiracy of Ravens by Lila Bowen (Delilah S Dawson). I'm now delighted that Lila has agreed to answer some questions about her two books.

(Mild spoiler: Sharp eyed readers will not that below I've referred to the main character in the books as Nettie - this is the name mostly used in the first book. For reasons which will become more apparent in the second, it would be more appropriate to refer to Rhett - but I have left the questions as I originally put them, after reading Wake of Vultures).

Q. Thank for agreeing to answer some questions about Wake of Vultures and Conspiracy of Ravens. First, Nettie Lonesome, your central character is - to me - wonderful both as a personality and as a brilliantly realised creation: I could hear her voice throughout Wake of Vultures. Did she come to you before the plot or did the plot come to you first and suggest her?

A. Thank you! Nettie was an immediate, organic response to the story idea, which was: What if Lonesome Dove had real monsters? The next question, for me, was: What if women in Lonesome Dove could be heroes instead of whores, martyrs, and lunatics? Nettie was born from the combination of these two questions. She's a character with every disadvantage in her world, but she's uniquely constructed to triumph anyway.

Q. How much control do you have over your characters? Did the book ever take completely unexpected turns? 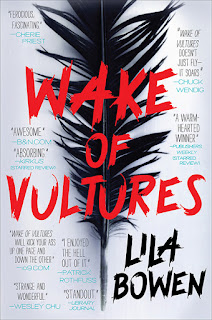 A. I always leave plenty of room for surprises. I knew Nettie first, then Sam, then Monty, then Dan, but I didn't know Winifred was going to show up until Nettie threw up on her. I don't start writing until I know the beginning, the instigating factor, the climax, and the ending of the story, but many of the twists and turns between these signposts ambush me. This is why I believe the subconscious is one of the writer's greatest allies. Your brain wants to make delightful connections.

Q. You say in the Author's Note that you set out to write YA but ended up writing fantasy instead. What is it about the book that places it in one genre rather than the other?

A. To be quite honest, the marketers at my publishing house decide this placement. Ultimately, they envisioned this series as something with a wider audience, which I appreciate. YA often centers on the bridge from childhood to adulthood, the journey of self-discovery. Which, I think, Nettie experiences. But the series goes beyond that, asking more sophisticated questions and taking Nettie down avenues beyond her own personal growth. It's Fantasy, either way, but her journey isn't limited to coming of age.

Q. You also mention some of the particular influences behind Wake of Vultures - not least Buffy the Vampire Slayer. What though inspired you to write in the first place - and how did you get started with your writing career?

A. I was always a reader, but I thought that writers were like nuns and heart surgeons-- that they knew, from a young age, what their calling would be. I knew I was an artist, but I had no road map for becoming a writer, so I didn't consider it a possibility. I am the owner of a relatively useless studio art degree.

When I was 31, my second child quit sleeping, and so did I. Running on three hours of sleep a night, my mind started to unravel. My husband, a psychologist, helped me schedule more sleep and suggested I find a hobby just for me that I could do even while caring for young children: writing. The part of my brain that would've said, “But I'm not a writer!” wasn't functioning, so I wrote my first book. It was a terrible book, but I went through the revision and query process and learned enough to write a better book that earned an agent and then an even better book that was purchased at auction as a three-book series. 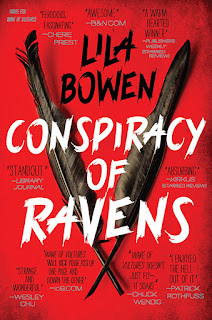 My book ideas come from all over. Wake of Vultures was indeed a combination of Buffy and Lonesome Dove. The idea for Hit came from an episode of South Park. Wicked as They Come came
from a dream that I met Buffy's Spike in a strange birch forest. I always try to be open to great book ideas.

Q. How has it been so far - how does it compare with what you expected?

A. It's amazing. It's such a gift, to know what I'm meant to do and be able to wake up every day and do it. I still take great joy in first drafting and editing, and getting to meet fans and other writers at conventions and conferences is a huge bonus. I have never had so much confidence, energy, and gratitude. I try to pay it forward to new writers so that they find publishing as wonderful and welcoming as I did.

Q. Do you/ did you expect this book to be controversial (and did it turn out to be)?

A. Firstly, Wake of Vultures shouldn't be controversial at all. We owe it to our readers to show a mirror for them on the page, so that everyone can see themselves as the hero of a story. But I know that publishing is sometimes late to the party, and I also know that my agent had reservations regarding whether the book would find a home in traditional publishing. Since the sale, I've seen nothing but love and enthusiasm from my publisher and from readers. I haven't received a single piece of hate mail or a rude tweet-- about this series. Goodness knows I get them for other things! All the emails I've received for Nettie have been kind and effusive, and it means so much that readers appreciate Nettie and her journey.

Q. Conspiracy of Ravens picks up directly where Wake of Vultures ends. Do you plan more adventures for Nettie?

Yes! Orbit recently bought two more Shadow books [Hooray! - BBB], so we're planning for four books in the series. There will also be short stories in various anthologies and magazines, most of which I can't announce yet.

Q. Do you know in detail where the rest of the series is going? Or is it still fairly open?

A. We have a loose synopsis for each book with the understanding that stories need room to grow and mutate. I have a couple of new characters I can't wait to introduce to Nettie, and the plot should wrap up in a satisfying way-- just in case readers are worried that book 4 will end on a cliffhanger.

Q. Are there any clues in the (brilliant!) map included in the books or is this just scene setting?
I'm so glad you like the map! I feel so fortunate to have worked with a great artist, Tim Paul, on both maps. We try hard not to spoil anything for savvy map fans, but I have left all sorts of interesting tidbits that I can use in future books. It was really neat to see the Durango Rangers badge I'd envisioned created for the map in Conspiracy of Ravens. I want a Ranger star, too!

Q. Durango is clearly part of a wider alternate world. Might Nettie explore that?

A. I think the Shadow will mostly roam Durango, but I do have a feeling that Nettie's world is related to the world in my Blud series, which starts with Wicked as They Come. Fanged rabbits, magic dust, monsters... I have my suspicions. Nettie is a creature of her world, of the hard ground and hard folk of Durango, and it has a hold on her heart and her destiny.

Q: Finally, a question that isn't (directly) about the book. You're trapped in a lonely mountain cave and the rescue party will take several days to reach you. You have plenty of food and water, and you can have one book with you. Which would it be?

A. Something big and meaty-- maybe The Outlandish Companion by Diana Gabaldon. I've read all her books many times over, but I've never picked up the tome that includes all the history, recipes, references, and tidbits about the series I've loved since 2000. Take your time, y'all. As long as I've got gluten free crackers and cheese, I'll keep reading.

Thank you so much for the interview!

And thank you again Lilia (Delilah) for answering these questions.

Both books are out now, available from the usual places - your local bookshop, or here, here or here (UK links). They are both exciting, genre-stretching reads and I'd strongly recommend them.