You'll want to get your teeth into this one....

Tommi Grayson is a young woman, living her life, having fun, working putting together exhibitions in the Dundee art world. When her mother dies, Tommi  decides to take a break and visit New Zealand, where she was born. She wants to investigate a side of her family she knows little about. She does know that there is a dark secret - and she wants to confront it. What she couldn't suspect is how bad things really are. The moon is nearly full, and the pack is ready.

I just loved this fresh take on the whole werewolf thing (OK, strictly that's a spoiler - but go on - that title? the blurb?).

But genes are genes. It's more of a concern that the Ihis - her estranged family - are determined to have her in their pack, and her unpleasant half brother Steven has no scruples about how he makes this happen: for him, a young female is there to be used as he wishes - mixing up both human and werewolf gender politics, this story makes no bones about the threat that faces Tommi.

But she's resourceful, and she acquires allies. What made the story for me was that aspect: not so much the fighting and the running, but the relationship between Tommi and the mysterious Lorcan. I was impressed how Lewis gets into Tommi's head and makes her so, so real. I mean, how would you feel if you suddenly discovered that you will transform for three days every full moon and can rip open a deer with your teeth? Tommi is conflicted, to say the least. She is guilty. She is scared of what she might do to those close to her. She is also afraid of the Ihis and of what they might want for her.

One of the strengths of this book is the way it operates on two levels - we have Tommi's werewolf self but also her closeknit group of friends. She continues to be a sociable young woman - on the outside - but what happens to her in New Zealand leaves scars, and not just physical ones. Tommi's preconceptions and relationships are turned upside down: it seems, in fact, that she'll have to grow up and that's actually a more scary prospect that the full moon, hair-and-claws thing.

It's a great read, not afraid to poke a bit of fun at its own urban fantasy genre in places (as when Tommi quizzes Lorcan about what sorts of monsters really exist, or when he admits to his true age), confident in handling both romance and gruesome, furious violence and with a truly engaging hero.

Bring on the next full moon, and the next book...

This review is part of the Who's Afraid blogtour - look out for the other stops coming up on the tour!

And don't forget the Q&A with Maria and the giveaway here. 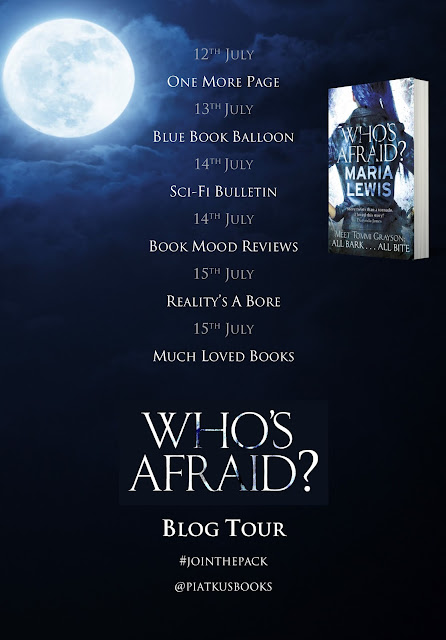