Upoming: we go a bit Antipodean

Got a sort of Antipodean week coming up here.

First, on Tuesday I'm going to be reviewing Vigil, a new book by Angela Slatter.

Vigil is an urban fantasy set in Brisbane ("Brisneyland") where Verity Fassbinder is part of the thin line keeping the peace between the Normals and the Weyrd. This book has real heart with the problems of people - whether or not human - at its centre and a strong message of tolerance.

I'm reviewing as part of the Angela Slatter blogtour: see poster below for other stops. 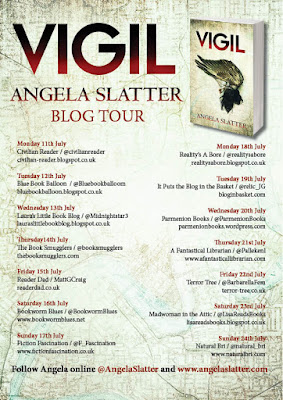 Then on Wednesday I'll be reviewing Who's Afraid by Maria Lewis, another urban fantasy.

When Tommi Grayson's mother dies, Tommi takes a trip to New Zealand to investigate a side of her family she never knew about before. She does know there is a dark secret and she wants to confront it. What she couldn't suspect is how bad things really are... and how much worse they're going to get.

This is a cracking read, with Tommi's preconceptions and relationships turned upside down by that fateful visit and the discovery of a whole new world that she's part of, whether she likes it or not. 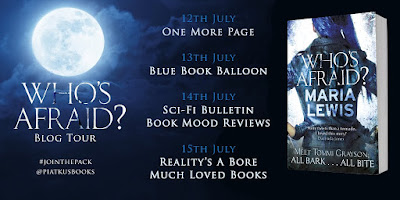 I'm also on the Who's Afraid blogtour and I'm hoping to host a Q&A with Maria  about her writing and about Who's Afraid in particular.

And on Thursday I'll be reviewing Drowned Worlds, the new anthology by Jonathan Strahan, themed around rising sea levels and the drowning of the land.  Strahan notes in his introduction that the city where he lives, Perth, is slated for abandonment due to the stresses of climate change.

With this in mind he presents 15 stories meditating on the process, impacts and potential outcomes of climate change.

Strong and serious stuff, but excellent stories and as ever Strahan's themed anthologies are an excellent way to sample works by all those super authors you may not have tried yet!

After that we come back to the Northern hemisphere, hopefully with dry feet, to a review of Charles Stross's latest, The Nightmare Stacks. But more of that later...