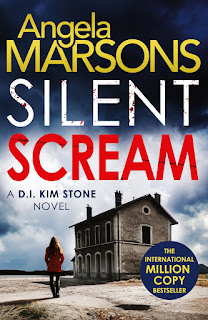 I'm really pleased to have Angela Marsons joining us as part of the Silent Scream blogtour, to answer some questions about herself and her writing - and especially about Silent Scream, her first novel featuring DI Kim Stone, published now by Bonnier:

Five figures gather round a shallow grave. They had all taken turns to dig. An adult-sized hole would have taken longer. An innocent life had been taken but the pact had been made. Their secrets would be buried, bound in blood...

Years later, a headmistress is found brutally strangled, the first in a spate of gruesome murders which shock the Black Country.

But when human remains are discovered at a former children’s home, disturbing secrets are also unearthed. D.I. Kim Stone fast realises she’s on the hunt for a twisted individual whose killing spree spans decades.

As the body count rises, Kim needs to stop the murderer before they strike again. But to catch the killer, can Kim confront the demons of her own past before it’s too late?

So - over now to Angela for the answers!

BBB: Welcome to Blue Book Balloon. An easy question to begin with. How did you get started with your writing career?

AM: I have always been writing. I started with short stories throughout my teens and started writing my first book in my twenties.  Many books followed and all were submitted to agents and publishers. They were all met with a response of ‘we like it but we just don’t love it’. After many years of trying I did eventually secure an agent although we parted ways a couple of years later.  During that time I was incredibly fortunate to work with the talented editor Keshini Naidoo who never forgot the Kim Stone books. The first one was submitted to the digital publisher Bookouture who luckily loved it. This has led to an unbelievable print deal for three of the Kim books with the fantastic publishers Bonnier.

BBB: How has it been so far - and how does it compare with what you expected?

AM: It has been amazing.  Nothing I ever imagined or hoped for could have prepared me for the response to the Kim Stone books.  Bloggers and reviewers took Silent Scream to their hearts and championed the book from day one.  This in itself was completely overwhelming.  Every single dream I’ve ever had has come true over the last 18 months and I still pinch myself every day that I am lucky enough to do what I love and call it a job.

BBB: How long has DI Kim Stone been in your mind and how did you “find” her?

AM: Kim Stone had been bubbling in my mind for many years but I knew that she didn’t sound very likeable so I left her there.  I spent many years trying to develop characters that I thought publishers would like.  Eventually I decided I had to give her a voice and write the book that I wanted to write and Silent Scream was the result.

BBB: How much ‘on location’ research did you do? And where?

AM: I think they tend to evolve of and because of each other. My plots normally come from a subject that I want to explore or learn more about.  In Silent Scream I wanted to focus on the care system while investigating both current and historic cases. Then the characters needed to tell the story begin to form in my head which then sparks further plot lines or twists when I discover what each character can add to the story.

BBB: How much control do you have over the characters? Did the book ever take completely unexpected turns?

AM: Ha, I love this question.  I don’t have as much control as I would like. When writing Silent Scream the character of Kim continued to grow and evolve in my head and scenes that I had loosely planned had to be scrapped as she took matters into her own hands.  There was one particular scene where she is looking through a fence at a derelict building and I suddenly knew she would not be satisfied with this.  She would climb over the fence and take a closer look. Once I accepted this the pencil flew across the page.

BBB: What other writing has inspired you?

AM: I am inspired by Val McDermid’s Tony Hill series.  I also love the Carol O Connell’s Mallory series. My writing hero is Aaron Sorkin, creator of The West Wing. He always manages to combine drama with human emotion and a touch of humour but his writing is so tight that not one sentence is wasted.

AM: Yes, definitely more Kim Stone. Luckily for me she has a lot to say and there are so many situations that I want her to face and there is much more to discover about her past.

BBB: Do you know in detail where the rest of the series is going? Or is it still fairly open?

AM: I like to keep it fairly open and I tend to know the subject of the next book if not the detail.  I don’t like to plan too much as that leaves very little surprise or opportunity for stories and plots to develop organically.

BBB: Angela, that you for these answers and the insights they give into you and your writing. Before we finish, one further question which isn't specifically about the book. You're trapped on a lonely island and the rescue party will take several days to reach you. You have plenty of food, but you can only have one book with you. Which would it be?

AM: It would be Disclosure by Michael Crichton. It was the only book that ever caused me to call in sick for work.  His skill in posing and answering questions is just outstanding.  After reading it for enjoyment I read it again for analysis.  I wanted to understand how he had captivated me so completely.

The tour continues on 25th July with Handwritten Girl 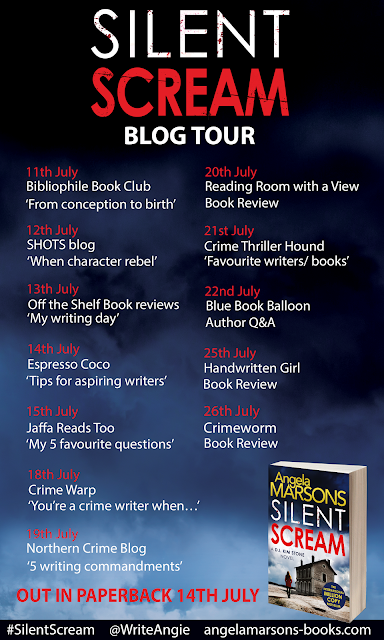