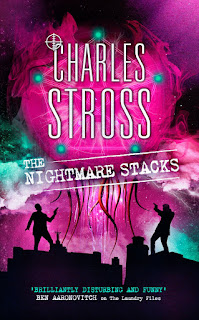 This is a review of the seventh book in Charles Stross's Laundry series, featuring the covert department of the UK intelligence services that deals with supernatural challenges, especially the threat that the Great Old Ones will return to earth to eat our brains. While readers may have joined in at this point or with the previous book, The Annihilation Score - both are perfectly accessible - I think most will have followed from the beginning. So if you haven't, there may be some mild spoilers below and I would strongly suggest doing so (they're excellent - it won't be a chore!) before reading any more.

I'm intrigued by the way that the Laundry books have blossomed. I have always enjoyed the mix of classic horror, geeky in-jokes and organisational politics - Dilbert meets Doctor Who - but at the start these books were infrequent, coming out between other Stross projects. Lately there has been an annual book, and they've now widened their scope from Bob Howard, the original hapless geek protagonist ,to other Laundry members - first, Bob's partner Mo and now, to Alex the ex-banker and vampire. (The joke writes itself, really).

Doing that has given the books a shot in the arm, I'd say. Bob has accumulated skills and powers steadily until there was a risk that, like a 20th level paladin in a starter dungeon, he would just steamroller the bad guys away. Mo also has a lot of power and her violin solos are to die for (literally) but Alex is basically a beginner. His vampiricism gives him certain advantages, but also vulnerabilities, and he's relatively inexperienced.

He is, though, the man on the ground - in Leeds - when the somewhat Delphic "Forecasting Ops" warns that something may be about to happen - specifically, CASE NIGHTMARE RED. With a scratch team, he's about to take on the greatest threat to the British mainland since 1066...

I enjoyed this book. I really enjoyed it. There was just the right balance - for me - between action (BIG battles! Shooty things! Planes! bangs!), intrigue (Alex becomes entwined with the enemy agent First of Spies and Liars in a kind of reverse James Bond scenario), humour (Alex's family life is also going through a crisis, and you can't expect Mum and Dad to lay off sorting out their children's love and professional lives because of a mere incursion form another dimension, can you?) and deadly, dull bureaucracy (I shudder to imagine the post-event review coming after this book closes...)

Stross also continues to slot folklore and SFF/ horror tropes into the framework of his imagined universe, where magic is equivalent to advanced mathematics and the rapid increase in both conscious brains and computer hardware is fast creating a critical mass of computation that has thinned the walls of reality. In earlier books we've had superheroes (the ability to manipulate reality creates beings with all sorts of new powers), vampires and now... but I won't say exactly what. Just take my word. It's impeccably worked out, chilling in conception and inflicts real panic on the streets of Leeds.

It was also fun to see the imagined response - detailed and convincing - by the British armed forces to the scenario: the usual state of directed panic as whatever resources are available are thrown at poorly understood threats with unfortunate Tommy Atkins left to put things right:

For it's Tommy this, an' Tommy that, an` Chuck him out, the brute!
But it's " Saviour of 'is country " when the guns begin to shoot...

In sum my message is: buy this book. Then turn off Twitter, lock your door, cancel any work and just read it. You won't want to stop till it's done.

I can only guess what's going to come next. I think events here have now blown the Laundry's deniability to bits: I want to see how they operate under a spotlight...