Harry Potter and the Cursed Child

So yesterday, Son and me went to London to see The Harry Potter Play, aka as Harry Potter and the Cursed Child, parts 1 and 2. We had our tickets - bought nearly a year ago - and don't they look like something that might win you a tour of Mr Wonka's Chocolate Factory? 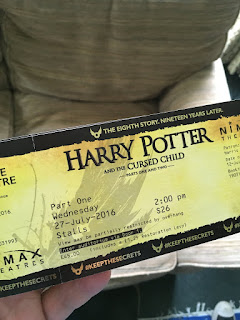 Much has been said about the importance, with this particular play, of Keeping The Secrets.

I agree with all of it. There are things in this production that you simply mustn't know about till you see them happen. I'm even a bit equivocal about the publication of the script in a few days time - but then since most who buy and read it won't ever get to the theatre to see the performance, it seems hard to grudge them this marvellous story in some form.

Because it is, above all else, a great story, and a great Harry Potter story. One could argue that it's actually the best of the eight (now) Harry Potter stories, but I'm not going to do that because spoilers. I can, however, think it.  My advice would be, if you are going to see the play, don't read the script. If you think you may go and see the play, don't read the script.

What more can I say? There are a few things, I think, without spilling any magical beans.

First, practical stuff. Get there in good time, but don't be too fussed about this - the doors open an hour before the performance, the queue forms some time before that, but you don't actually need to be seated a whole hour ahead. If you do have some time in hand though you'll be able to browse the merch in the shop. There is also a bag search so to save time avoid big bags with lots of pockets - but that's always good advice in London theatres, they're mostly not roomy places.

Watching both parts in one day worked for us - these aren't two plays, Part 1 ends at a definite "I have to know what happens next!" cliffhanger. But it is a long day.

As to the play itself: I'll be guarded. Here are some random thoughts which in my view don't give away anything. Still, some have said that you shouldn't even read the programme before the play - just a warning!
So - beg, borrow or steal tickets, Confund the Muggle in your life if you must, get on your broomstick and go and SEE THIS PLAY.