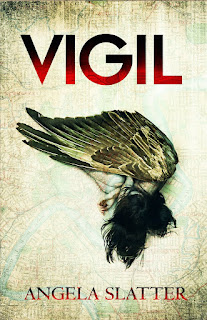 Vigil is an episode in the far from easy life of Verity Fassbinder. Firmly rooted in the Urban Fantasy genre, Vigil is also refreshingly different in that Verity isn't - exactly - securely part of that world herself, rather she has one foot in it and one in the world of Normals, being of mixed parentage. That qualifies her to mediate between the two, sort out trouble and keep the peace.

So when children begin to go missing, and someone starts murdering Sirens, who should the Council turn to but Verity...

I really enjoyed this book. Verity herself is a very strong, very with-it central character who has a well developed moral core, partly, the book hints, in reaction to her father, Grigor. When he was discovered to be a Kinderfresser - a butcher of children, serving them up on the dining tables of the rich in the Weyrd world - Verity's dad was thrown to the wolves to protect respectable citizens with unpleasant tastes. And her life was turned upside down. So there's guilt here, some sense of atonement, and an alienation form the world of charms, unnatural strength and fabled creatures.  All this positions her perfectly to interrogate the Weyrd's goings on and speak bluntly about what she finds. Sometimes too bluntly.

The book has a rather noirish sensibility, with Brisbane happily filling in for the mean streets of whereever and Verity, a determined woman who is not herself mean, walking them and bringing a kind of justice.  This is reinforced by the writing: just the right side of hardboiled, peppered with coinages like "kidnappy" or "stabby", painting Verity as cynical, an impression with is then belied by her sheer sense of empathy and connectedness, caring for the single mother and kid next door, the nest of Sirens who are being killed off, and even the vagrant girl who causes her so much trouble. At the centre of this book are people - whether Normals or Weyrd - and especially children, and a cold fury at those who treat them as mere things.

Slatter also has great fun. We meet mythological creatures drawn from across time and from many different cultures, drawn to Brisbane, a New World for them, by the desire to escape the mobs, the burning torches, the pitchforks of the Old. There are three sisters who may be the Fates of European legend and who now run a coffee shop selling mean chocolate confections. The Boatman, who carries dead souls away to - where? - also features, as does does an enigmatic and well preserved - and strangely fascinating - Central European nobleman named Bela... and of course those Sirens, who have formed a community choir which sings regularly out in the park.

What doesn't really appear - or hasn't so far - is a sense of the mythology of the original inhabitants of Australia. There is a consciousness among the Weyrd that they are recent arrivals, which must imply the existence of others, but most of this book is taken up with a dark story of parents and children, of the Old Ways - eating flesh, pressing wine from children's tears, controlling women - brought by the settlers and which have stubbornly refused to die out. Verity finds that there are gaps between the official line - of the Weyrd living peaceably alongside the Normals - and the reality.

And that's even before we are introduced to older, stronger and higher powers with an agenda of their own. Powers that see even the Weyrd, let along humanity itself, as slight, to be brushed away. As disposable things, of no account. The slow unveiling of this deeper plot, alongside the myriad complicated and interlinked cases that Verity is initially confronted with, is one of the joys of the book and I'm not going to risk spoilers by saying any more about it. But when it did become clear exactly what Slatter was doing - and how cleverly she had put the story together - I almost chuckled out loud.

Finally, I just have to mention: there is a character in this book who has MY NAME! How cool is that? I'm assuming this is for real and not just an uber marketing trick where each reviewer is sent their own personalised copy... Whatever, if I get a chance to have my copy signed I'm going to make sure I get Angela Slatter to write something appropriate for me!

So - an excellent, action filled start to (I hope) a new series with a hero I want to learn more about. And a world with a lot still to unpack, I think.

Definitely a series to watch.

This post is part of the Vigil #blogtour - for other stops see poster below. 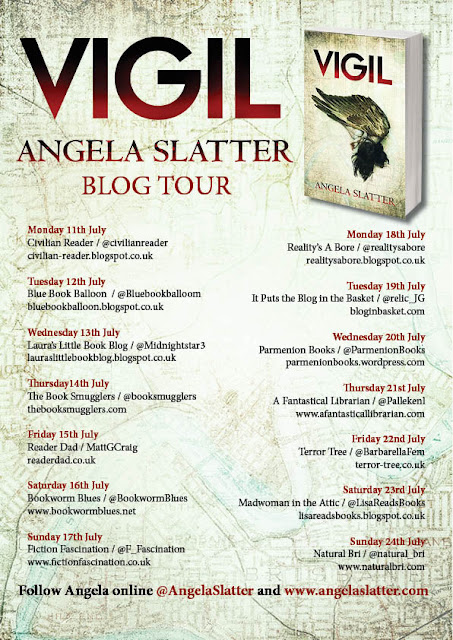