Blogtour: Who's Afraid - some Q&A with Maria Lewis and a giveway 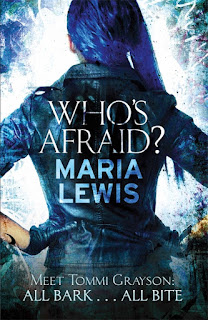 Maria Lewis's new book Who's Afraid? is out on Thursday 14 July from Piatkus. My review is here but in brief it's emotionally rich, scary and very, very readable.

To celebrate, Maria dropped by to answer a few questions about the book and her writing. I'm really excited to welcome her here, so enough messing about, let's go!

Maria, thank your for taking some time to answer some questions.  First, how did you get started with your writing career?

I landed a journalism scholarship to university which saw me work full time as a cadet reporter at the local newspaper while studying by correspondence and that was kinda it. It was a job I loved immediately and I’ve been working as a professional journalist for the past 11 years writing for everything from The Daily Mail and Empire Magazine, to Penthouse and my current gig working on television series The Feed (which is a nightly news program in Australia).

How has it been so far - and how does it compare with what you expected?

My background as a journalist has been a very different experience to being a published author. Firstly, your work has a much longer life: generally speaking if you were writing for a newspaper, online or even with the TV series I work on presently your work only has a life of a few days at most. With Who’s Afraid? one of the most amazing aspects has been getting to meet people in person who are about to read the book, have just finished it for the first time or on their second or third reading. Getting to engage with readers and get nerdy is the absolute best, as that’s something I always loved doing with the authors I adored and I feel very fortunate to be on the other side of that. In Australia I’m almost exclusively invited to pop culture conventions where you get a large number of people who are all passionate about some form of fandom and you get to have some really great interactions.

Where did Tommi Grayson come from?

I’ve been wondering that for the past six years, honestly. Consciously, I have no idea: I was plotting a graphic novel at the time based on Egyptian mythology when Tommi Grayson strutted into my brain and refused to leave. Subconsciously, I’d say she’s an amalgamation of the women I grew up loving in pop culture: Lt Ripley, Uhura, Buffy, Scully, Huntress, Veronica Mars, Xena, Ardelia Mapp, She Hulk etc. Tommi in a lot of ways was a direct response to me getting frustrated with all the genre stories I was reading at the time which were being told by white, 15-year-old girls who could save the world while simultaneously negotiating the difficulties of a love triangle. In short, that felt like bullshit and I wanted a heroine – or anti-heroine, if you will – who felt real, which included her having flaws and complexities and werewolf claws for a few days of the month.

Who's Afraid covers a lot of ground. Did you scout out all the locations yourself - and more generally, do you do a lot of research?

The novel is set 70 per cent in Dundee, Scotland and 30 per cent in New Zealand and the locations will expand further as the series rolls out over five books. Who’s Afraid Too? – for instance – is set in Wigtown, Scotland and Berlin, Germany. For Who’s Afraid? though it was simply a case of doing my research. New Zealand is my home country and even though I’m from the South Island, I knew the North Island and Rotorua area well enough that I thought I could do it justice. Dundee was a different story: I spent a few months reading up on the history, going through census data and interviewing Dundonians living in Australia. Eventually for the final stages I flew over and lived in Dundee for three months, reworking the story and making tweaks to the first book and aligning sections for when the series continues.

It wasn’t so much ‘characters’ as ‘character’: I had Tommi Grayson first, then I had to build everything else around her. That included the world, the mythology, the back-story and the friendships and relationships that define her. The plot and arcs came quite naturally after that.

How much control do you have over the characters? Did the book ever take completely unexpected turns?

Haha yes, well, sometimes I was a little surprised at my own brutality to be honest. I’ve had the series plotted for quite some time and have been working my way through it. So slowly as the books develop I’ve been able to return to particular chapters and moments and adjust them after thinking about it for a wee while and deciding that maybe that’s not something that particular character would do or perhaps it would be more like x instead of y.

Yes, I love that enthusiasm! Lots more Tommi! Like, tonnes of Tommi! Book two is done, dusted and about to be sent off to the printers within a matter of days and I’m excited for people to join the metaphorical wolf pack and go on the next journey with her. The Who’s Afraid? series is planned for five novels, so rest assured she’ll be back … and back and back and back.

Do you know in detail where the rest of the series is going? Or is it still fairly open? 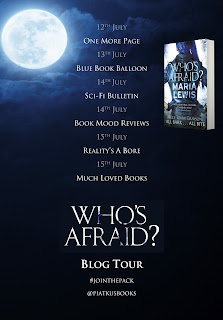 I’m a little OCD to be honest, so everything but the fifth book is written. I’m currently going through and editing the fourth while on this UK book tour but the third had been delivered (pending editor notes, naturally). I’ve always had a solid skeleton for the books and known where it was going, and given the years I’ve had to work on this thing there have been elements that have evolved naturally or things I’ve been fortunate enough to change as I’ve decided a different solution might work better. Your debut novel is a tricky one, because you have to deliver a world and characters that are really going to punch readers in the gut and make them come back for more. Yet simultaneously you can’t overwhelm them with too many personalities or an info-dump of mythology and supernatural structures. It’s difficult for me in that regard because I want to throw everything at the wall and see what sticks, so I have to restrain myself and be more patient. That’s one of the reason I’ve enjoyed writing the sequels so much as it has given me the space and time to gradually expand the universe.

Any advice if I should meet a werewolf ever...?

Check your lunar cycles, make sure said meet up is not on a full moon and you should be mint. If it’s on the days leading up to the full moon it can’t hurt to have a raw, juicy steak with you as a diversionary tactic or a small country’s worth of sugary treats.

Finally, a question that isn't about the book. You're trapped in an abandoned lighthouse and the rescue party will take several days to reach you. You have plenty of food, and you can have one book with you. Which would it be?

I love this question and also hate it – one book? God damn it man. It would probably be the collected volumes of Brian K Vaughan’s Y: The Last Man as that’s a hefty tome and a brilliantly entertaining work that could keep me entertained until I’m screaming “WILSON!” at washed up sports balls on the island beach.

Thank you Maria for those insights into Who's Afraid and its world - best wishes with the publication and the rest of the series!

You can buy the book at your friendly local bookshop, or here, here or here.

Now, to add to the excitement we've a giveaway - courtesy of Maria's publishers, Piatkus all these lovely goodies are up for grabs: 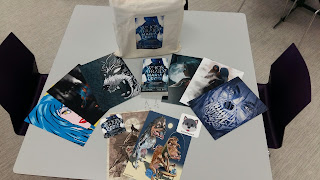 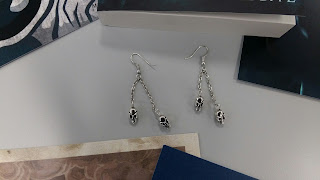 For a chance to win, comment on this post or RT. (This is UK only I'm afraid). I'll pick a winner at random on Thursday evening, and the pack will come calling...