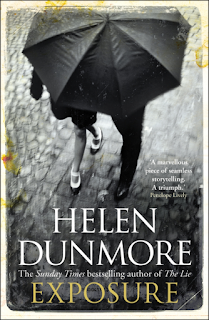 It starts with the whistle of a train. Indeed, trains, whistles, smoke, railway magazines, train sets and branch lines are scattered through this book, to a degree that seems out of proportion to even the world of the early 60s, before Beeching. Only posh Soviet mole Giles travels by car, as if to underline his alienation from a society that "history had decided against". All the others face, in one way or another, the end of the line.

But then, what could be more fitting in a story about a mother and her three children forced into waiting when Father is arrested and charged with espionage? Dunmore clearly has in mind another book* but this isn't in any way a rehash of that and while Paul, Sally and Bridget get their share of the story (and well portrayed they are too) the focus is more on Lily and how she copes in a strange new world after her husband Simon is arrested, and on Giles.

Delicately, patiently Dunmore unpicks the years that made them.

There is Giles's somewhat cool decision to become a traitor: his passionate affair with Simon ("Giles has been batting for the other side in more ways than one"): his disappointed, older self. There is Simon's rather hapless life, bullied by his posh brothers (they called him "milkman" because of some supposed doubt about his paternity) - his response is to reject his parents, his brothers, his family home, Stopstone - but not, unlike Giles, his country.

And above all, there is Lily (born Lili), a child refugee (or are we supposed to say "migrant" these days?) from Germany who has remade herself in her new home ("Mum is less German than anybody. They are more English than anybody.") but still doesn't... quite... fit in: (""Do you think" asks Sally "it could be that Mum doesn't know things because of not being born here?")

It's not just Lily who has done this. Everyone here is remaking, reworking, presenting themselves, even the children as they practice a little domestic espionage to find out what's become of their father. And most of the characters - even the most apparently rooted - are ready to fly in an instant. Giles knows what train he'll catch and what ferry, if his activities come to light (his spying? Or consorting with "his boys" in the clubs?) Lily, upon hearing that long feared knock on the door, knows what to do right away - get the children out of sight, put on a calm manner, smile. She also knows what needs hiding and how to do it. And even Simon, on remand in prison, begins to transform, becoming someone else, someone who can survive.

Maybe the railway references are more than a nod to that other book. Beneath the trappings of a spy thriller, they hint at escape, at change - whether it's Simon hearing the train whistle from the prison yard or Lily remembering the train she took from Berlin, with its different smelling smoke and demands from the police for "papers".

This is, I think, a book much less about the jolly fun to be had outwitting the enemy on the chessboard of the Cold War, or about betrayal, loyalty and concealment (though they are there too) but about the impact of all these things on innocent lives. Giles and his comrades play games that get people killed, arrested or ruined: the beauty of Exposure (and that title hints at so much that might be exposed in so many ways) is to show, from the inside out how those who aren't actually playing the great game get caught up, all the same, in the terrible works, how they lose their safety and security, the respect of their neighbours.

It's also about resilience and adaptability, about accepting what can't be changed and changing what can.

Exposure is an excellent read, a hard book to put down, and I'd thoroughly recommend it.

*The name is left as an exercise for the reader