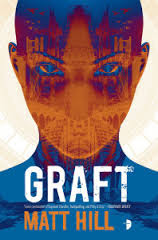 I'm grateful for an advance copy of this book from the publisher via NetGalley.

This novel is set in a near future, decaying Manchester which is both familiar and strange. While I wouldn't use the term "post apocalyptic" there is more than a hint of Mad Max here. (Or perhaps: this is what you might get if JG Ballard and Philip K Dick rewrote The Island of Doctor Moreau).

Clearly, something has gone very wrong: the economy is on its uppers, public services are non-existent and the only authority seems to be a vaguely mentioned "council". Nothing works, the city is run by gangsters ("Has he heard the rumour, they ask, that a gang of orphans living in the old city tunnels have turned bandit?") and those who can survive just have to graft to keep going - whether that means dodgy work for a scary self-styled Reverent who lives in a refugee camp in an old football stadium, working in the oldest profession or thieving.

The South, it is implied, is pretty much under water (for the Northerners described here that leads to lots of humorous asides: "You can do one back to your floods") but perhaps not subject to the same degree of gang rule, separatism and lawlessness as the North (though even there enough cohesion remains for Sellafield to remain guarded by its nuclear police and for "state" drones to wreak havoc from the sky on wrongdoers/ unfortunate bystanders. And the rivalry between Manchester and Liverpool is as strong as ever).

We never learn exactly what caused all this (global warming? disease?) although one flashback account seems to describe the moment when things went from bad to much worse. Rather the book is about the consequences for a small group of survivors - Roy, a hitman and enforcer; Sol, who makes a living pinching cars and breaking them up for part; Mel, Sol's ex, who runs a brothel - but most of all, a woman known only as Y.

Y exemplifies the fate of many subject to trafficking between this decaying Manchester and an even worse - and even stranger - place, where she is subject to barbaric experiments alongside many "brothers" and "sisters". While only one of many imprisoned in "The Mansion" she seems particularly important: again, we never learn why - just as we don't really find out what the point is of what is done there. At first sight it's just done for profit, but the sophistication of the setup seems to suggest there may be more going on?

Hill is particularly good when evoking the strange parallel world surrounding The Mansion or the grimy, dying North West - whether a shattered Manchester ("Ahead, the sky's shod in black-blue bruise"; "Everywhere she looked she found blackened spires: chimneys, pipes, cable, gantries") , a decaying Knutsford services or the wreck of a car ("a Ford, possibly") whose fate - driven beyond ruin yet still somehow carrying on - seems to stand for an entire country (world? but MSF is operating in Manchester so perhaps this fate has only overtaken the UK) teetering on the brink of Hell but never quite tipping over. At the same time he has great delicacy of touch, and alongside the action filled plot - all fights, killings, explosions and car chases - there is a real tenderness to the story of Sol, Mel and Y.

Sol has done bad things, unforgivable things. He knows how far he has fallen and can't face it. He still has a connection with Mel and seeks her help - or is he seeking her forgiveness? If so that's doubly ironic as he will be bringing down real danger on her and what she's built. But then Sol is not a good man, even if he's an interesting hero.

It is though Y who is really the centre of this book: robbed of her name, voice and memories, she needs to discover a place in this new world - apart from the fate - never spelled out clearly but certainly not nice - willed for her by her makers. She'll use anyone to achieve this but, in the end, she has to do it for herself, face the Manor Lord, whatever - whoever - he is.

A searing book, but an excellent, cracking read.