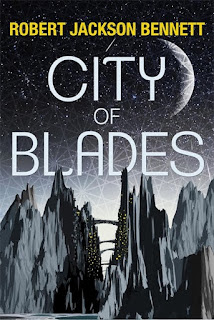 I'm grateful to Amazon for sending me a copy of this book as part of their Vine programme.

I loved Bennett's City of Stairs published in 2015 - it was so fresh, innovative and immersive - so was excited to see the sequel and delighted to get a copy for review.

It is five years since the events of the previous book. General Turyin Mulaghesh has retired from the army of Saypur and gone to live on a tropical beach. Shara Komayd has risen to become Prime Minister (though apparently not for long). Saypur continues to rule the Continent, whose gods it killed to overthrow centuries of colonial rule. But the Continent is complex, a dark continent with many secrets and dangers... so it's not surprising that a seasoned operator like Mulaghesh would be brought back into play when things begin to go wrong. Very much as in City of Stairs, where Komayd was the spy, Mulaghesh is despatched to the city of Voortyashtan (formerly ruled by the Goddess of war and death) to track down a lost agent.  Her arrival triggers a cataclysmic chain of events that force her to confront a grim episode from her past. If the Continent is dark, not all of the darkness comes from the Continentals and their tyrannical gods. Oppression begets reaction and cruelty leads to cruelty.

Building on the earlier book's themes of colonialism and cultural destruction, Bennett again produces  novel that is not just entertaining but engages with some meaty themes - here, military occupation, battle trauma and its aftermath, the sheer messiness of combat leading to rage and a desire for destruction for its own sake (embodied at its purest in the nightmare goddess Voortya and her "sentinels" but also reflected in Sigurd's berserker rage and in other characters too).

That preoccupation makes it rather more melancholy and generally darker than Stairs and perhaps more of a challenging read, although I still loved the book and had to sit up late to finish it. Bennett has a real gift for words: here is description of an automated weapon "An enormous cloud of dust rises up as the PK-512 continues putting hundreds and hundreds of rounds into the skin of the earth, like it's a pressurised water sprayer sawing through limestone." Or those sentinels: "...splintery creations of bone and horn and metal, long and thin and positively lethal-looking, as if someone could teach a knife to float." Nor are the gentler parts of the story any less convincing or less vividly done.

In short, this book lived up to my expectations, with the later part, especially, a white-knuckle read that demands to be taken in one session. Superb fantasy - and things are clearly building to a climax in the final volume.
Email ThisBlogThis!Share to TwitterShare to FacebookShare to Pinterest
Labels: 2016, book review, Fantasy, gods, occupation, Robert Jackson Bennett, soldiers, The Divine Cities, war