Review: Friends of the Dusk by Phil Rickman 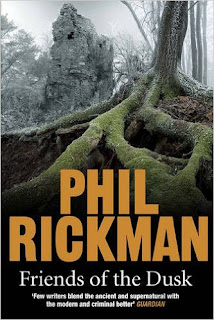 I bought this book from the Waterstones shop in the Oracle Centre, Reading.  I was pleased to see it on the shelf because it's a I follow Rickman's Merrily books - but had no idea it was coming out. I scour publisher catalogues, follow publicists on Twitter and trawl book blogs - and yet, surprises are still possible!

This is even more astonishing given that Merrily has now been adapted for TV. Bit of a publicity failure there, I think.

Friends of the Dusk covers familiar ground for fans of the series - the uncertainties and difficulties of Merrily's life as the Hereford Diocese's "deliverance consultant" ("Exorcist" to you and me), her teenage daughter Jane's growing-up angst, Merrily's relationship with Lol and, of course, the oddly matched police couple Frannie Bliss and Annie Howe. Here, Merrily struggles with a hostile new Bishop at the same time as she gets an awkward call for help from a Muslim couple. Bliss and Howe investigate a missing skull, and Jane struggles with - well, teenage stuff. Along the way we see a very nasty old man in a care home, and reacquaint ourselves with Athena White.

Some things are a little different. Gomer Parry only appears briefly, and both Merrily and Gomer (when he shows up) are puffing on e-cigarettes. We get rather less than usual of Ledwardine life - the daily ins and outs of the small town - and the challenges Merrily faces all come from outside: the Bishop, the problems of the Maliks in Cwmarrow (which confront Merrily with political, rather than spiritual, issues, and a chance to become emrboiled in controversy at just the wrong time). I rather regretted this, and also the feeling that Merrily is being acted on rather than setting the pace.  Rickman evokes the creepiness of Cwmarrow very well, and has some other fine moments of tension and ear which wind Merrily up but she doesn't actually do a great - rather she's the catalyst for others to reveal information - Huw Owen, maverick freelance exorcist, the Maliks and those who lived at Cwymarrow before them, Jane who undertakes a lot of background research into Cwmarrow, even Sophie the Bishop's Secretary. And of while she's the occasion for the new Bishop to unload a great deal of negativity - he clearly wants rid of her - again she doesn't do much.

We've seen in previous books of the series how much of a force Ms Watkins can be, so this was somewhat disappointing. (In earlier books she has sometimes been less central to the action - with Howe and Bliss taking more of a role - but she was always active, even so).  I also felt that the ending didn't, perhaps, come together. There is a very quick resolution of one plot thread which had been built up throughout the book into a real menace and might, realistically, have been given rather more space to wind down. Another - involving Howe and Bliss - doesn't resolve (but that's OK with me, no doubt it will feature I the next book). I was also left unclear about the precise scope of the supernatural element.

That isn't meant to detract from the book. Time spent in the company of Merrily Watkins is always time well spent, and Friends of the Dead is, as ever, well written. It also has a surprisingly fresh take - based on real events, or at least events as recounted in medieval chronicles - on what has become a rather hackneyed staple of horror fiction. And there are some real gems in here - Rickman could I'm sure easily produce the YA "Chronicles of the Summoner" books which feature here (though I hope he doesn't, given what we learn of their origin) and he springs a number of surprises as well as entering into the mind of teenage Jane in what seemed (at least to this middle aged male reviewer) a very convincing way.

My overall verdict would be, I think, that if you like the Watkins books this is the sort of thing you'll like - if you've been turned on to them by the TV production you're best in any case to start at the beginning (because spoilers, but also because you get a more intense Merrily experience).

Disclaimer: the reviewer's wife is a Church of England Vicar, but definitely not a deliverance consultant.