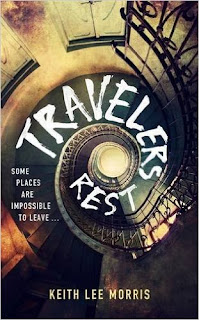 I'm grateful to the publisher for letting me have a copy of this book via NetGalley.

This is an excellent book, both entertaining and though-provoking. It is not, though, especially in the first part, an easy, tripping along read. Nor does it easily fit into genre categories. For both of these reasons I fear it may struggle to find its audience.

Travelers Rest is the story of the Addisons - Tonio and Julia, their ten year old son Dewey (referred to sometimes at "The Dooze Man") and dissolute (but fun company) Uncle Robbie. On a snowy winter's night they are travelling through Idaho on Interstate-90 and stop off at the town of Good Night, with its old hotel, Travelers[sic] Rest. The town seems familiar: "I've heard of this place". The name of the hotel presents a puzzle - something isn't right about it: it is a statement of fact: "yes, travellers rested. All people did, eventually..." The hotel itself is old fashioned, empty, draped in dust cloths ("basically all the stuff you saw on TV whenever they wanted to get across the idea that someplace was abandoned and scary"). The reader's Gothic antennae will be twitching at this point - just what is going to assault this family? Ghosts? Monsters? Aliens? The iolated and inbred residents of a back-of-nowhere community? - and it comes as no surprise that something happens.

But the "what" - that's another matter. Even setting aside concerns about spoilers, it's hard to describe exactly what follows, as the four are separated and... acted on... by the town that is Good Night.

Cold and aloneness are the abiding impressions ("her mind felt white with snow, cold and pleasantly numb". Everything takes place in an epic snowstorm - we are constantly told of the settling snow, hear its sound, smell it, experience the sheer physicality and bone numbing coldness of the winter as well as the deprivation of vision, of free movement, that the snow brings. To be in the snow for long is pain and death but to escape from it is to be confined in the rackety maze of the town, a labyrinth of stairs, tunnels and passages which seems to extend not just across space but across time. The experiences of the separated Addisons - each reliving the moments in the past that made them who they are - overlaps with those of other visitors from more than a hundred years ago. To begin with we know (we think) which is which but as everybody goes further into that maze it becomes unclear who is remembering who, who is becoming or coming from who. There seem to be echoes between now and then, but what is cause and what is effect is mysterious, tantalising.

This much is clear - the Addisons are not the first to lose themselves in Good Night. Others have been before and left behind "souvenirs" - lost, bewildered children, resented by the regular townsfolk. It's a fate Dewey is determined to avoid, but alone, hungry and cold, what is he to do?

The story uses horror tropes and has a setting familiar from countless speculative and weird tales - it's easy to see influences here from Stephen King or even HP Lovecraft, whether direct or simply because they've become part of the culture - but I don't think that Morris's main business is with that. He doesn't downplay these - as I've quoted above, they are often overtly deployed. But what seems to be going on here is much more metaphorical, much more internal and this is where I fear the introspective nature of much of the prose may frustrate some. We're given extensive sections where the writing explores what it is like to be Dewey, a boy/ young man on the threshold of adolescence but in many respects a loner, an observer. We're told about Tonio and the impact of him of Dewey: "And then came Dewey. Game over. Defenses wiped out immediately, entirely, white flag waving in the breeze. Dewey was a different thing altogether, for which he had no classification-his son was so much a part of his own internal world that is was hard to believe anything could happen to him that didn't also happen, simulataneously, to himself." We hear of Julia's life in which "she was constantly busy, and yet she never felt she was really doing anything." We learn of Uncle Robbie' - good old Uncle Robbie - anguish, aimlessness, his drug and drink binges and we feel the cold again when his relationship with his less than warm and sympathetic parents is exposed.

Themes of being lost - in the maze of Good Night, in an old mine, in a scary hotel, in one's own thoughts and feelings - and found - and finding others and losing them - recur endlessly, just as Tonio tries, repeatedly, to escape from his endless, neither now-nor-them, afternoon with the creepy hotel keeper (Scooby Doo is references several times!) the mysterious Rose who seems to be his companion. It's no use, Tonio always seems to lose himself in the snow and able only to crawl back into the hotel.

I found it a profoundly disturbing yet fascinating book. Morris easily matches or exceeds one's expectations, built up by all that overt foreshadowing - there is true horror here - but he also subverts them, using his characters' own unease about who they are and where they are going to undo them. That, in the end, is far more chilling than the gothic stuff because it connects at a very basic level with the reader.

So avoid those out of the way, mid West towns - if you're able...