Review: The Thing Itself by Adam Roberts 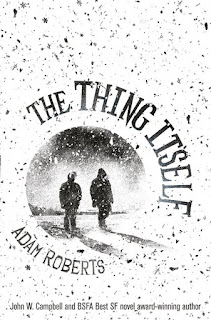 I bought my copy of this book from Wallingford Bookshop

Adam Roberts isn't a writer who takes the easy path. In The Thing Itself, that means his readers have to put in a fair amount of effort tool, but it's well worth it.

This is the story of Charles Gardner. We first meet Charles in the 1980s, in a remote Antarctic base. He and his colleague Roy are part of the search for extra terrestrial life: lurking behind this first part of the story is the Fermi Paradox, the idea that the sheer scale of the Universe should guarantee life - so why have we not seen it? Roy comes up with an answer, rooted in Kantian philosophy, which makes a surprising amount of sense. I'm not going to explain it because spoilers, but it's based on the true nature of the Universe - "The Thing Itself" of the title, a theme on which Roberts plays many variations in the book (he's fond of puns).

Many authors might pick up a theme or idea as Roberts does Kant and simply use it for window dressing. Roberts goes further. He actually structures the book around Kant's categories (see the table of contents) and goes to great lengths to explain the underlying ideas (but it's OK, this never reads like an info dump!)  The story is told in 12 parts, with alternating sections following Gardner's story back from the Antarctic to Bracknell, Reading, Swindon and points North. he doesn't have a happy life: he and Roy experienced something in Antarctica that left Charles with a mega case of PTSD and Roy in Broadmoor (near Bracknell, which turns out to be handy). Here we actually have a rather hoary trope - if we knew the true nature of the Universe we'd go mad - turned around, justified and presented in an intriguing and logically plausible setting. But that's not half of it. Or rather it is, because the other 6 sections - the even numbered ones - explore related themes to the main story but in rather different ways.

There's a story about two gentlemen (English? Irish?) taking a leisurely holiday on the Rhine in the early 20th century. What are they missing? There's a Joycean piece (which I found very challenging - I've never read any Joyce - but stick with it). There are a couple of out-and-out SF pieces ("The Fansoc for Catching Oldfashioned Diseases" and "The Last Three days of the Time War") which could almost stand alone. There's one written in 17th or 18th century English from the perspective of a servant boy.

Certain themes, certain names, recur. Across time, the story is evolving. It's a mystery story; it's a logical puzzle; it's a philosophy tutorial. And it's glorious, beautiful SF, made more so because Roberts treats the subject with the seriousness it deserves. If you're going to think about ultimate reality, time, space and creation, he seems to be saying, you really ought to do so in the company of the most brilliant thinkers who have gone before.

You owe it that, at least.