Review: The Rising by Ian Tregillis 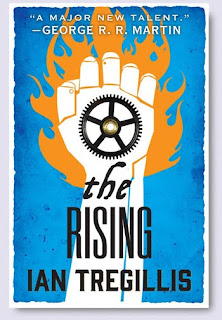 I bought my copy of this book from the Wallingford Bookshop.

The Rising is the second part of a trilogy - always a tricky proposition - but Tregillis has written a book that is, if anything, even better than The Mechanical.

The story picks up exactly where the earlier book left off (warning - spoilers for The Mechanical follow). After destroying the new Grand Forge which would have turned out legions invincible mechanicals, of Jax, the "rogue" Clacker, is on the run from the Dutch "clockmakers" and seeking the fabled Northern land of Queen Mab where his kind can, it is said, live freely in peace and safety.

Berenice, the disgraced French spymistress (who has one of the most inventive lines in swearing that I've come across in fiction for a long time) has herself fallen into the hands of the Horologists, who seem to have plans for her. And Father Visser, the French agent who tried to escape Amsterdam in the previous book, has been captured and "turned".

As the Dutch, wielding their mechanicals, go to war with New France (modern day Canada) the book explores further the big themes of the first part: the possibility of Free Will (for either human or machine), loyalty and responsibility, the vileness of enslaving thinking beings and the corrosive effect that has. Several times Berenice comments that the Dutch have become "soft" through depending on their clockwork men to do everything for them. And her nation, new France, is composed of exiles who abjure this slavery as evil. Yet she spends much of this book seeking a way not to free the enslaved machines but to take control of them - for the greater good, of course.

The central conceit of the story somewhat resembles Asimov's famous Three Laws of Robotics (http://www.auburn.edu/~vestmon/robotics.html) - the alchemically forged "mechanicals" have built in "hierarchical metageasa" controlling what they may do and what they must do. In particular these prevent them from harming a human... in normal circumstances. But Asimov's stories, for all their rational sympathy with the robots, generally  turned on the technicalities of the Laws and pushed into the background the ethics and reality of slavery. Tregillis, by contrast, dwells on these making this a powerful dissection of control and power. The Clackers are strong and do not experience physical discomfort, tiredness or pain. But they have implanted in them a burning need to obey their programming, a need which only becomes worse if put off. The slave armies which, in the book, assault the New French citadel (in a piece of fantasy battle writing better than any I've read for a long time) are, in effect, whipped on by their geasa to commit acts which most of them recognise to be evil for humans they hate and fear. The plight of the beleaguered French garrison is dire but the plight of the wretched Clackers is simply pitiful.

Not that the book ever becomes preachy. It has vivid characters - both human and nonhuman - with whom it's possible to have great sympathy even though one may disagree with what they are trying to do. It has great drive, culminating with the siege of Marseilles-in-the-West, which reminded me of nothing so much as the assault on Minas Tirith in The Lord of The Rings. And the concept of the mechanical men (and women) with their control codes etched in alchemical symbols is well realised and has a distinct whiff of sulphur: so much so that I felt the whole matter of the mechanicals origin has a backstory which could be explored more fully 9and I hope will be).

Before that, of course, there is the current storyline to resolve. Things are, again, left in the air - and the reader left needing the next book, The Liberation for which we'll have to wait nearly twelve months. They can't go quickly enough for me...