#Review - Temple of No God by HM Long 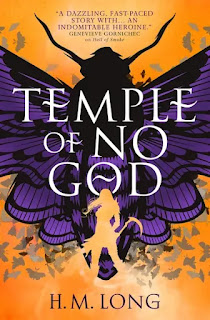 Temple of No God
HM Long
Titan Books, 25 January 2022
Available as: PB, 368pp, audio, e
Source: Advance copy
ISBN(PB): 9781789095562
I'm grateful to the publisher for an advance e-copy of Temple of No God to consider for review.
Temple of No God picks up the story begun in last year's Hall of Smoke. Hessa, High Priestess of the goddess Eang, betrayed and killed her deity when the new god, Thvnder, arose. Ten years later, as a leader among the tribes who previously worshipped Eang, Hessa is older and wiser, but as handy with an axe as ever. Offered an opportunity to interfere in the politics of the once mighty Arpan Empire, Hessa travels south with a few trusted friends and her estranged husband, Imnir, into the heart of the Empire - albeit an Empire in chaos, with at least three rivals for the throne, and a new cult of the god Larun rising which is apparently able to draw power from the very land, leaving it blighted and dead.
I really enjoyed Temple of No God. Long provides, again, what worked so well in Hall of Smoke: Hessa as the main protagonist, a woman skilled in combat, confident, as ready to walk the otherworldly High Halls and imbibe their honey-scented magic as to endure brutal marches across remote mountains, hold council with kings and emperors, or take in an orphan who needs protection.
But this book isn't just more of the same. Hessa has aged and matured. The revelations of Hall of Smoke destroyed out the secure footings of Hessa's worldview, leaving her distrusting both purported gods and treacherous men. They also made her responsible for a lot that she might wish she wasn't - such as the continued deception practised by her and Imnir on the new priesthood of Thvnder. And there are other problems that can't, in general, be dealt with by the stroke of an axe or a bit of magic - the uneasy tribal alliance among the Eangi, or those those who still see Hessa as a deicide, worthy of death.
The events of Temple of No God add new layers to this - grand politics and concerns over the future of the magical realm, the Penumbra, Arpa's equivalent to the High Halls, where things have gone amiss since the death of the Arpan gods. There are also personal issues. Hessa is at the same time both bloodthirsty - at the start of the book we see her leading a raid, as is the custom of her people, happy to destroy a village and loot it - and afflicted by conscience, unsure of her place with her difficult husband and feeling her lack of a child.
So I wasn't surprised that Hessa rather jumped at the offer from the Arpan envoys. Yes, it brings great opportunities (even if there is also - implicitly - great danger if the power struggle in the South comes out the wrong way) but more importantly, it's a diversion from the mundane, an adventure, a distraction from some of these problems.
Or perhaps not... there's a great deal going on in Temple of No God, with both a returned cast of characters and some new ones caught up in the struggle. Here you'll find brutal, blow by blow combat; anguished partings and loss; double-crossing; unlikely allies and always, always, a galloping pace of story that keeps the reader deeply engaged. Hessa is a remarkable protagonist, and the sole point of view here, so tends to remain at the centre of the action (this only fails once when, towards the end of the novel, she's out of things for a a few hours while a LOT of stuff is going on and I was left wishing I knew just what had happened to everyone else in the meantime).
Overall, a vigorous ands satisfying continuation of the earlier story and one that promises more to come. There are signs of trouble (perhaps) in the future: Imnir's warning to Hessa about taking too much power from the High Halls, alliances that are convenient here but may be less so in future, and some rocky relationships that will surely need care and attention, something hard to guarantee in the general mayhem that is Hessa's life.  I look forward to seeing a middle-aged Hessa face some of these in a further book!
For more information about Temple of No God, see the publisher's website here.
Email ThisBlogThis!Share to TwitterShare to FacebookShare to Pinterest
Labels: 2022, combat, Fantasy, gods, Hall of Smoke