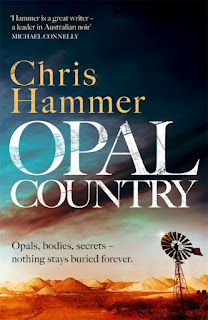 I'm grateful to the publisher for an advance copy of Opal Country to consider for review.

Chris Hammer's new thriller Opal Country sees Detective Sergeant Ivan Lucic despatched from the big city to the remote mining town of Finnigans Gap where an opal miner has died in mysterious, not to say gruesome, circumstances. Teaming up with young Detective Constable Nell Buchanan, Lucic finds the investigation derailed almost from the start when his boss, DI Morris Montifore, fails to show up for the flight.

Opal Country is described as "standalone" and features detectives - Lucic and Buchanan - who haven't met before, but readers of Hammer's previous novels, Scrublands, Silver and Trust, will note that Lucic's backstory involves contact with journalist Martin Scarsden who featured in those books. That contact which is partly behind the plight of DI Montifore, currently suffering blowback after revealing high-level corruption with the aid of Scarsden. So we're in the same New South Wales that Hammer has written about before and the atmosphere - the down-at-heel rural town, the heat, the isolation - is also familiar.

Lucic and Buchanan, however, are less so, and I enjoyed how the story, told from both their perspectives, exploited both our unfamiliarity with them, and theirs with each other, to sow doubt about their motivations and behaviour. How much of an issue, for example, is Lucic's gambling problem? We see him slope away several times to the poker machines, and at one stage he's concerned he may have nothing left in his account, but is this something that could make him vulnerable to influence - or which may attract the attention of his colleagues in Professional Standards? Buchanan, too, has secrets, and has made mistakes, which might put her at risk. Starting out hero-worshiping Lucic and seeing him as a means of advancement, she soon revises her opinion but seemingly still finds him hard to place. I enjoyed the depth and complexity in this relationship and how it subtly changed through the book, without ever becoming a huge issue in itself.

The background to the crime is also fascinating. There's a dense web here involving family relationships, guilt, a religious cult, the declining fortunes of the opal-mining industry (basically lone men with power tools digging pits out in the scrub), potential outside investment from billionaires - and, of course, the constant theme of corruption and influence. Montifore trod on important toes and is suffering as a result. Lucic and Buchanan are warned off when they get too close to the mining operations of a wealthy businessman. There is a bit of a sense that - in the most civilised of ways - certain crimes, certain people, are simply off limits, one such having occurred in Finnigans Gap several years before. Could it be related to the death of Jonas McGee? Though nobody will say so outright,  it seems as though Lucic's job is as much to establish whether the new case is one of those that needs to be tidie away, as it is to actually find out what happened.

Lucic himself is an intriguing character to have as a point of view. The son of immigrants from Central Europe, he sets himself slightly apart from the "anglo" Australians (there are some amusing scenes as he struggles slightly with the bland diet on offer in Finnigans Gap) adding even more of a detached tone to the outsiderdom inevitable when a detective in a suit flies in from Sydney. Again, though, Hammer makes this a matter of mood and observation, rather than turning it into an us-and-them struggle between locals and offcomers.

The town itself is vividly - almost lovingly - portrayed, from the absence of trees to the graduations between the different cafés and restaurants (avoid the Alpine, if you must go there, have the burgers) to the local worthies and their slightly over-the-top names (Trevor Topsoil supplies mining gear, Humphrey Tuppence is the lawyer, The Irishman buys the miners' opals). As with Hammer's previous novels, the book comes with a generous map of the town and its surroundings which helps the reader to follow all the comings and goings.

Overall, a fun and engaging book in which Hammer changes gear adeptly from murder mystery to conspiracy thriller to action drama, with Lucic's and Buchanan's developing and changing relationship never far in the background. I'd strongly recommend.