#Review - All the White Spaces by Ally Wilkes 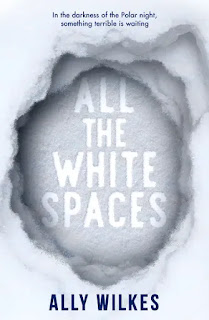 I'm grateful to Titan Books for sending me an advance copy of All the White Spaces to consider for review.

In 1920, Jonathan Morgan and his family mourn the loss of his two brothers in the Great War. Jonathon was devoted to Francis and Rufus although - as we learn from his memories throughout the book - they didn't really see him as equal to them.

Unable to bear the life his parents will force him to lead, against all his sense of who he is, Jonathan persuades family friend Harry to accompany and help him, runs away, and hides aboard Fortitude, the ship of Antarctic explorer James "Australis" Randall. Jonathan is seeking the company of men - heroes - who will accept him, and among whom he may, perhaps, achieve some desperate glory comparable to that of Francis and Rufus.

It's a different world that Ally Wilkes takes us to in All the White Spaces. Not only is the fell, merciless territory of Coats Land itself a strange, haunting place - a place unwelcoming of humanity - but the psychological landscape, the attitude of those on the expedition, feels so remote in its almost inhuman fixation on painting in those white spaces. Oddly, in some respects, at least outward ones, it reminded me most of a series of children's books -  Arthur Ransom's Swallows and Amazons stories - in its portrayal of an obsession with, a worship of, the last great generation of explorers, a meticulous attention to their journeys, their survival and their endurance.

It is, though - to be absolutely clear - not a book off children's adventure, even if Jonathan starts by seeing the world in that way. This is not the high Edwardian nursery but the fallen, post-war world. The members of the expedition have all brought their own baggage to Coats Land. Randall, too, is mourning a loss. One man was a conscientious objector, and is therefore hated and mistrusted by his fellows. Others are scarred by what they saw in France. The expedition is pinched, operating on a shoestring, forced to get by with second best, and it soon becomes clear that the whole thing is something of a gamble, an attempt to reclaim lost glories, to succeed where a German rival recently failed. A reflection, perhaps, of the war-weary, fading state of Britain.

Such a comparison could have been made crudely and clumsily, but Wilkes, in her first novel, avoids that danger, drawing a group of men whose strengths and weaknesses, histories and prejudices, are allowed to speak for themselves - but also to evolve, becoming more marked as danger increases and as its nature subtly changes. Physical threats - cold, darkness, shortages of food, failure of equipment - are joined by something stranger, exploiting who the men are and what they've lost. English reserve and the suppression of feelings are fatal then: the only way to survive is to trust, to share, even to love, and this is so out of kilter with the attitude of Imperial disdain that won the war, it's hard to see how anyone will come through.

Jonathan is at the centre of the storm. For the first part of the book, despite his derring-do in joining the expedition (albeit as a stowaway, a 'spare'), he's quite passive, observing from the sidelines and keeping his secrets. That makes sense given who Jonathan is is, but makes the story rather slow, perhaps. All the same, Wilkes uses this space to build up a detailed and sympathetic view of Jonathan as a person and as something of a mystery. A misfit who wants to join in, Jonathan is set on being one of the men, sharing their attitudes - detestation of the Hun, contempt for 'conchie' Tarlington, worship of physical courage and strength - even more so because of the differences that would set him apart if discovered. There's a contradiction to him that splits what one sense are his natural sympathises from what's needed to be part of the expedition. As a result, Jonathan's at the same time likeable and frustrating. I would have liked to have seen more of his earlier life, how he developed, and how he coped with his stuffy parents and his brothers.

Once the Antarctic winter falls and the survivors of the expedition begin to buckle, seeing enemies everywhere - whether those elusive Germans, saboteurs and traitors in their own ranks, or dark things out in the cold - Jonathan has plenty of reason to reflect on those he has loved and, seemingly, lost and on his place in the world. His survival will depend on unpicking that: not only a matter of practicalities, of food, shelter, and light, but of understanding what has drawn him into the worst place in the world and deciding whether it can hold him there. That level of self-knowledge and the bravery to face what he knows sets Jonathan apart, I think, in the end from the tough old Antarctic hands who surround him - creating a paradox that to take his place among them as a survivor, he needs to know how not to be like them. The book is, then, a rich chronicle of self-discovery and self-acceptance - and one I would  strongly recommend.

For more information about All the White Spaces, see the publisher's website here.