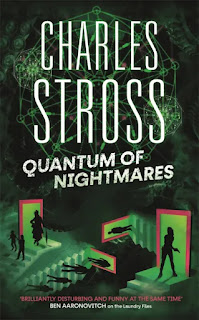 Quantum of Nightmares
Charles Stross
Orbit, 13 January 2022
Available as: HB, 356pp, audio, e
Source: Advance copy provided free by publisher
ISBN(HB): 9780356516936
I'm grateful to the publisher for a free advance copy of Quantum of Nightmares to consider for review.
Quantum of Nightmares is the immediate sequel to Dead Lies Dreaming, both stories being set in Charles Stross's Lovecraftian version of the present in which advanced mathematics and computer science are, in effect, magic and can be used to summon unhallowed creatures from beyond the walls of the world. In the main sequence of novels, this danger is fought by an occult arm of the British Civil Service known as the "Laundry". It's a fight the Laundry has been slowly losing, resulting, before Dead Lies Dreaming, in a hostile takeover of the Government by an undead eldritch god whose regime is  referred to euphemistically as "The New Management".
This isn't just background to Quantum of Nightmares and Dead Lies Dreaming, rather both books very much examine, from below, the state of things given this premise. An actually existing Dark(ish) Lord isn't therefore just a fantasy trope, but a political fact to be endured - with the inevitable satire that allows, given the state of Uk politics in the early 20s.
To this end the two books have their own cast of characters which is quite distinct from those of the Laundry books (whose protagonists have over their own history levelled up quite a bit and don't provide that plebs-eye view of the world). There are the Lost Boys - Imp, Game Boy, and Doc - basically a pack of well-intentioned  rogues occupying a crumbling mansion in Kensington, who in Dead Lies Dreaming had a bit of a Peter Pan thing going on. There's Del, the Deliverator. She's the getaway driver. Mary MacCandless, a professional thief and grifter trying to keep up with her dad's care home fees any way she can. Mary (who has a magical bag) in this book sweeps into the life of the Banks children and takes them on a wild adventure. (Where have I heard those names before?) And there's Eve, Imp's sister, a high-flying executive who may just have exiled her cultist boss Rupert behind those same walls of the universe and taken over effective control of the Bigge Organisation. And finally there's Wendy (Deere, not Darling), Del's girlfriend, an ex-cop and now private thief-taker, just getting by in her single room apartment, who's been employed to look into some shady goings-on at the supermarket chain Rupert was planning to take over.
The world of The New Management is a grim place if you're not on top. Criminality is far form discouraged, indeed it's recognised with a host of new offences, because criminals make excellent sacrifices, an important consideration when the country is governed by one of the Dark Gods. Skull racks abound, both on motorway gantries and on the new structure at Marble Arch, or perhaps I should say Tyburn. (Not, NOT an artificial mound...) The book has a distinct 18th century vibe, as a Mr Wilde, the 'thief-taker general', operates in a grey area between the law, private enterprise and his own pocket and as the unfortunate 'de-emphasised' underclass (think "hostile environment" applied to those economic units that have no obvious utility) disappear in the night to reappear as... well, you'll have to read the book to find out about that.
It's a perfectly pitched story that portrays a nightmarish near future that may be based in part on cosmic horror, but reads as equally plausible speculation about where the unrestrained business methods of our private equity overlords, and their tech-solution pushing hirelings, may go. Truly, the real horror is less the dictates of the New Management than the depths of what humanity may do. Kidnapping, murder and control of others by whatever means are the games here, with everyone enmeshed in different ways into the system that will surely in the end grind them up for feedstock. Eve in particular faces an even more gruesome future under the spell of Rupert, who's taken to sending emails from beyond the grave.
It's hard to convey in a review the sheer texture of taint in Quantum of Nightmares, the sense of daily corruption and collusion with mundane corporate structures aligned to mind-warping evil (I did always have my doubts about HR...) Fantasy yes, but there is a sense in which it very much reads as being about these times. It's also witty and laden with references and cultural echoes. Really, you just have to read this book - and you will surely want to do if you have been keeping up with the Laundry. If you haven't, I'd begin with Dead Lies Dreaming first).
For more information about Quantum of Nightmares, see the publisher's website here.