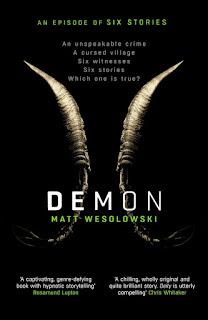 Demon (An Episode of Six Stories)
Matt Wesołowski
Orenda Books, 20 January 2022
Available as: PB, 225pp, e
Source: Advance copy
ISBN(PB): 9781913193980
I'm grateful to Orenda Books for an advance copy of Demon to consider for review, and to Anne for inviting me to take part in the book's blogtour (my first tour of 2022!).
Scott King returns to his true-crime podcast for another episode of Six Stories, in which he will 'rake over a grave' by examining a historical crime. Scott's technique is to interview those with a variety of perspectives, leaving it to his listeners to judge what they think happened - if they can.
This time, King is looking at the murder, in 1995, of Sidney Parsons, a twelve year old boy with learning difficulties, by two of his classmates. Robbie Hooper and Danny Greenwell have since been released from prison and given new identities, and the interviewees include those with some knowledge of that process and its results. As rumours swirl that either Robbie or Danny is to be unmasked, and new incidents begin to occur in Ussalthwaite, Scott King's investigation seems to be crossing over from the historical and the hypothetical to the actual and the real - and to be addressing the tricky issues of rehabilitation, atonement and redemption. Inevitably Scott comes under scrutiny himself. The story therefore is about much more than a murder in a snugly self-satisfied little town, but confronts modern Britain's darkest prejudices, as well as media prurience and clickbaitism.
I have loved Wesolowski's setup for these books. The series has examined crimes and wickedness of all kinds across many walks of life, with Scott King's contextualising and studied neutrality - and the differing accounts - allowing us, the readers, a peculiarly intimate relationship with both victims and perpetrators. Given the particularly distressing nature of the crimes described here I knew the approach would be truly tested - see the note that opens the book 'Please be aware before you proceed that this book contains fictional violence against children and animals that may cause some readers distress or upset'.
Yet, for me, it still succeeded, which is a testament to Wesolowski's writing but perhaps even more to his sense of empathy and understanding of human nature. What he does here is to give both vivid and moving life to the victim, Sidney, but also to portray the killers (if that is what we should call them), Robbie and Danny in a truly three dimensional way. There are notes of horror here, not only in the stark events of 1995 but also in a general background of taint, of sulphurousness, which seems to cling to the village of Ussalthwaite itself. While that is of course something that raises the general notoriety of King's podcast, it's also a thing that might be seen either as objective truth suggesting some kind of supernatural element to the crime, or as a subjective factor, a way in which the people of the village and the kids in particular try to understand the world. That gets a good deal more complicated when everything is sluiced in hindsight, and the wider opinions of the world - based on gossip and sensational headlines - are introduced
Neither King nor Wesolowski himself will give a final verdict on that, and - as one would expect with six different witnesses - the accounts are themselves contradictory, even on whether one should interpret the supernatural - if it did play a part - as positive or as evil, or just as one of those things, part of the background. Really, the nature of evil, and the tendency of humanity to judge, are what is being examined here - and Wesolowski, for all his willingness to tolerate and explore moral complexity, isn't letting anybody off the hook. I have seldom recently read a book where I felt so complicit with what was happening, and it's certainly a story I had to consciously decompress from, so engaged did I become - at 225 pages, it's not a long book but goodness, does it spin its web on the reader!
Not always an easy book to read and it won't suit everyone, but Demon is an excellent literary crime novel, serious but absorbing and, in places, nothing short of heartrending.
For more information about Demon, see the Orenda Books website here - as well as the stops on the blogtour listed on the poster below.
You can buy Demon directly from Orenda, from your local bookshop, or online from Bookshop dot org UK, Hive Books or any of Blackwells, Foyles, WH Smith, Waterstones or Amazon. 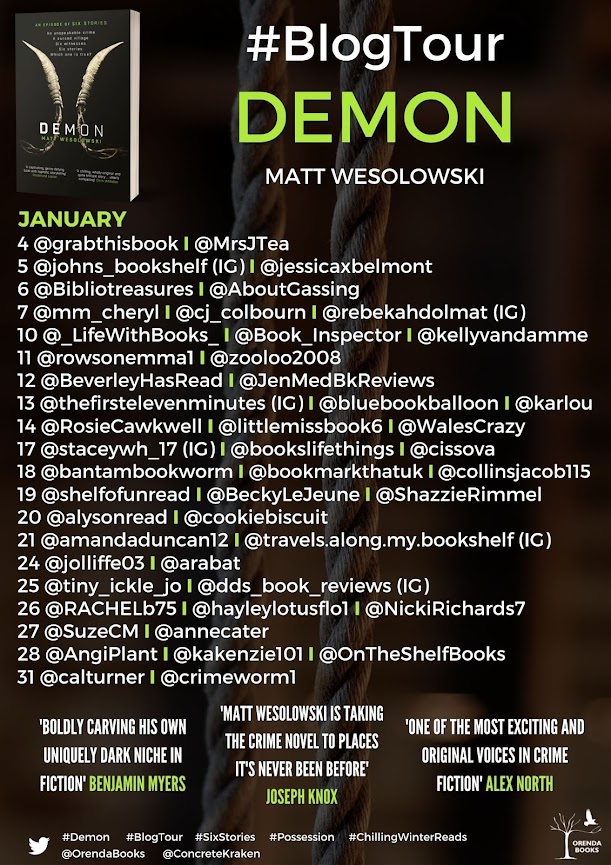