#Review - First Born by Will Dean 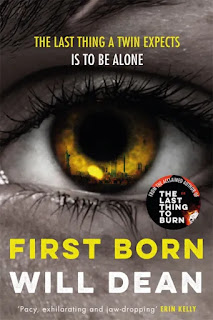 I'm grateful to the publisher for an advance e-copy of First Born via NetGalley.

In his new standalone thriller, Dean gives us a tense, twisty story focussed on the relationship between twins Molly and Katie ('KT' to her sister) Raven living respectively in London and New York.

As the book makes clear, supposedly identical twins can turn out to be very different. One of the two prefers 'monozygotic'. Identical is 'a blatant lie. A travesty...' We see this in the contrast between staid, nervous Molly, living her restricted life in London and painfully aware of all the threats inherent in everyday life, and Katie, who has spread her wings, won a scholarship and jetted off to the Big Apple to study.

I thought at first that Dean was going to show us a Molly panicking, unable to function, a fish out of water as she's forced to travel abroad when things go wrong, but I should have known that he's a much more subtle writer than that. Molly is perfectly capable of facing her fears, even while regaling the reader with the relative risks of a phone charger or a poorly cooked restaurant meal. While her obsession seems to consume mental energy and throw up obstacles, she's adept at addressing her concerns and planning around them ('This is a classic Molly raven risk-reward situation') which then provides her a margin of safety, a heuristic, when she moves into a dangerous new arena.

Because it seems that there was more going on in Katie's life than her parents and sister thought. When Molly joins Paul and Elizabeth in New York - slumming it in a budget hostel because family fortunes are actually not too good right now - she decides to investigate what has been going on, a course of action that will test her planning and strategising (whether in improvising weapons or passing without being noticed) to the limit.

I really felt that Will Dean was having fun with First Born. While his last thriller The Last Thing to Burn was grimly realist, First Born just lets rip with a sizzling "What if...?" scenario in the pair of twins and with the idea of one investigating what happened to the other. Yet Dean makes its all so plausible, with the cool assessments of risk grounding the story as we move from one challenge to another - even as the tension screws tighter and tighter. It all culminates in a race for survival as New York braces for a hurricane (more disaster planning needed, of course). The sense of a narrator who is, in effect, in enemy territory (there are some real shocks I didn't see coming which underpin that - just what DID Katie do?) nudges things into thriller, rather than simply crime, territory, but take it form me, this is much more complex than your typical psychological thriller.

As things spiral out of control the story becomes more and more of a rollercoaster but Dean keeps events rooted in the relationship between the twins, cleverly articulating both what they share and the deep differences between their characters. We hear from both of them, with their wildly differing perspectives on shared events providing clues to what has gone wrong - but will there be enough clues for even the most rational, the most calculating, student of risk and payoff to plot a way through the maze?

A really entertaining, fast-paced thriller that both contrasts with The Last Thing to Burn and confirms Dean's ability to hold his audience entranced.