Review - When the Dead Come Calling by Helen Sedgwick 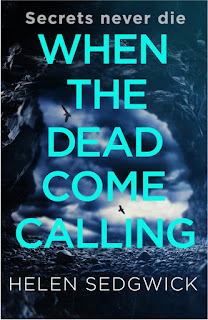 I'm grateful to the publisher for a free advance copy of When the Dead Come Calling to consider for review.

What a find this was! One of the great privileges of book blogging is being sent books you might not have noticed, might not have picked up, and finding they are so RIGHT. This story of death and the past rising to engulf a remote seaside town was simply compelling - haunting, sad, atmospheric and at times simply terrifying. While firmly a here-and-now crime mystery, in its depiction of isolated Burrowhead it approaches folk horror, and all while delivering an incising commentary on the state of modern England.

DI Georgie Strachan heads a tiny police presence - four officers - in the town of Burrowhead. Anomaly layers on anomaly. It's the sort of rural outpost that isn't supposed to exist anymore - Georgie is reluctant to ask for repairs in case the higher ups notice the place and shut it down. She herself is an incomer, a Black woman with an accent - what is she even doing there? And her husband Fergus - what's his game? made redundant when the nuclear plant closed, he potters about, trying to establish a local archaeological society, communing with the stones in the wood, seeking a connection with "our history".

When psychotherapist Dr Alexis Cosse is found dead in the children's playground (he's another incomer, having just got his citizenship) George takes on the investigation, with little outside support. It takes a couple of days before she even gets a response from Headquarters and they grudgingly dispatch only DS Frazer to help out. Resented by the rest of the team, Frazer seeks to make his mark but feels a palpable hostility, a watchingness, from the villagers. Meanwhile, Pamali at the Spar, Crosse, and even Georgie herself have been receiving racist hate mail...

Sedgwick spins an elaborate tale here, deftly weaving together the town's recent past, its older secrets and the its current state of isolation to produce a claustrophobic, pressured atmosphere. Bad things have happened in Burrowhead: things everyone knows about, but doesn't discuss. There is a sense of belonging among the inhabitants, of shared history and a kind of stubborn pride, but it's also a sense of complicity, of shamed refusal to own what has been done. England in little, perhaps. The town is palpably out there - a hard place to find, almost a world of its own. There's a sense of closing in in the circling birds, the patrol boats, the military carriers moving out on the seas. early in the book we are given a description of the town, with its three roads, meeting in a triangular green. We're told where each road goes - they all fizzle out somewhere in the countryside, leading to a blighted farm, an abandoned church, that playground. Where are the roads that lead out of - or into - the village, I wondered?

Within this little arena, the village looks to its own. Ancient grudges fester. Wrongs are tolerated, resentments nurtured. The little rituals that have maintained peace seem to go awry. There are moments of pathos, sad memories explored and Uncle Walt, an elderly man becoming confused, goes walking in his dressing gown. Perhaps he knows something, if anyone would listen?

Oh, and there;'s someone hiding in a cave under cliffs too - a cave haunted by the tragic dead off three centuries, and maybe more...

Through all this, Georgie seeks connections, facets, answers. Sedgwick tells us a little about her history - about what racist violence has done to her on another continent. She is, as it were, primed to see the signs, but has she missed something under her nose? Certainly she and Fergus seem to be at odds - as George gets ever deeper into the case, Fergus begins to splurge money on metal detectors, drones, and other high tech paraphernalia, becomes obsessed with standing stones, cup and ring markings and other signs of the past. But is it a past Georgie can share?

Simply a splendid, stunning opening to a detective series, Dalziel and Pascoe crossed with The Wicker Man but better than that. I think this is bound to be a hit of 2020 and I look forward to more from Helen Sedgwick.