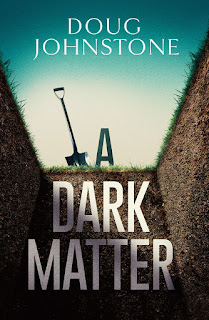 I'm grateful to Orenda Books and to Anne Cater at Random Things Through My Letterbox for inviting me to take part in the tour and for letting me have a free advance e-copy of A Dark Matter.

I loved this book for a number of reasons, not all of which may generalise. First, and this is all me for,

To explain the jargon, I studied physics at Edinburgh (no introduction to the city needed I hope) University from 1986 to 1993 (BSc and PhD, I could think once upon a time) and for most of that period I worked at King's Buildings (KB) and was based in the James Clerk Maxwell Building (JCMB).

So those names, and the locations in this book, predominantly on the Southside of the city, brought back a lot of happy (and a few other) memories. Seeing Jenny, and Hannah, walk not only streets but corridors I knew, was a bittersweet experience. So far as I can tell, Johnstone's research is spot on, up to and including the jumbled layout of the buildings at KB - basically, every time they needed a new one they just banged it down in any gap they could find - the cramming of four postgrads into a small office, and the reputation of Negotiants.

But I'm not here to reminisce, and this book isn't actually set in the 80s, it's set now. My other reasons for loving it will though I hope map across to many of you - it is both a superb mystery, and a haunting and touching examination of grief and bereavement. Plus is has a great sense of place, of people going about their lives in one of those early Autumn warm spells that a generally chilly city favours its residents with occasionally. Of course that contrasts with the sense of bereavement, of loss - how can it all just go on? Why isn't everyone cast down, weeping, struck silent?

A Dark Matter is about three generations of Skelf women (and happily it's the first of a series so we'll be hearing more about them). Skelf's is an Edinburgh undertaker with a sideline in private detecting, but Jim, husband, father, and grandfather (to Dorothy, Jenny and Hannah respectively) has died. So it is his funeral we witness (we meet him first as he is cremated in the open air in the family garden, atoms mingling with those of the world around). It's his life that ends up investigated. But first, each of the women gathered in that garden has challenges in the days and weeks that follow. Dorothy as well as keenly, so keenly, missing her husband, begins to suspect that he was keeping something from her. ('Left behind to find out all the nasty secrets...') Should she look into this? Does she want to find the answer? Must she prevent someone else from doing so?

What does it mean to cease to trust someone who's dead, and how can that trust be restored?

Jenny, divorced some years before but now penniless and forced to move back into the family home and business, also has trust issues, in fact even more so. Her mother Dorothy almost abandoned the family once, and then her husband Craig did abandon her for Fiona. Now her mother reveals a friendship with policeman Thomas, and also raises doubts about her father. Jenny feels fragile, struggling with issues of her own worth and also drinking a lot. In many respects perhaps the most vulnerable of the three, feeling short on affection and likely to be taken advantage of

Hannah - well, Hannah's studying physics and has her head full of quantum field theory (a bit of a stretch, I thought, at undergraduate level?) as well as of her girlfriend Indy but is also missing her grandfather and worrying about her mum and Dorothy.

Then her friend and flatmate Mel vanishes, and no-one else will take it seriously...

Johnstone throws other mysteries at us as well of those of Jim and of Mel. There's the elderly man who thinks his carer is stealing from him.

Simon, the employee of Skelf's who vanished years before but whose Imogen has been paid, regularly, ever since.

The civil servant whose wife wants him followed, convinced he's having an affair.

As the three women set out to investigate all of these different puzzles, there's a sense that even they don't know if they are trying to push away the grief, the loss, or to find answers that will help to resolve it ('Maybe life is just a succession of diversion tactics'). But these aren't just cosy puzzles. Real lives are involved, as Jenny finds when she follows her target to a backstreet warehouse in Leith, or as Dorothy discovers when she confronts an angry mother while her daughter plays in the next room. As the stakes become higher and the tension - the grief and uncertainty - grow - all three begin to behave in scary ways, doing things that may expose them to danger or at the least damage lives and reputations. It's the kind of book where at times you find yourself holding your breath, almost afraid of what you may find on the next page.

In a way this book is very much an introduction to Dorothy, Jenny and Hannah who, as members of three different generations, have their own attitudes, prejudices and memories. We see Edinburgh through all their eyes, in different layers as for example Jenny ventures into Mel's student life and compares it with her own or as Dorothy (who teaches drums) encounters a young and confident teenage girl. In a way the three are exploring different timeslices of the same city, their past interactions with it forming the present in a very... quantum field theory kind of way! Each, at a different time, stands in the others' shoes, as it were, considering alternatives that never came to be (what of Dorothy had left her family? What if Jenny hadn't got divorced?)

At the same time the novel also explores the present, especially the patriarchal attitudes of so many of the men, highlighted by the experiences of both Hannah and Jenny which show how little attitudes have apparently changed ('Here two well-educated young guys acting like cavemen...') between the 80s and the present day.

There is, as I have said, a nice sense here of Edinburgh as a place (you can almost feel it breathe). There is also a fascinating look into a trade many of us are I thing fascinated by but perhaps almost don't want to know about - the funeral business. We see how corpses are prepared for burial or cremation, and how those in the trade perceive members of the public ('They either presumed you were morbid of they had their own creepy questions')

Above all and appropriately for a book that is set among the trapping of death and which focusses on the processes of dying and on what happens after, this book has a great sense of life. Not only the heartbeat of a great city and its people but the instinct to live away death ('she was twenty years old and had her whole life ahead of her and she was kissing a boy... and she had nothing to worry about, not a care in the world...') The book may I think show that this instinct must be directed, managed, in case it, too, becomes merely a distraction. But - and again in an allusion to physics - the several times repeated comment that 'we are our processes not our results' does suggest that it is a good instinct, that risk taking doesn't just merit rewards but is necessary for those good things - life and love and peace. All of the women here take risks, you will have to decide at the end of the book whether the process justifies them or not.

For more about the book, see the Orenda Books website here.

The blogtour continues! Just check out the poster below for some awesome reviewers.

Finally, the IMPORTANT bit. You can buy the book! Your should buy it! I'm a strong advocate of Your Local Bookshop (tm) with Hive Books - which supports local shops - as a good option if you want to order online. But other options are available - for example Blackwell's, Foyles, Waterstones, WH Smith and event, yes, Amazon, even them. Or you can ask your library for the book. Whatever you choose, get your copy. Orenda is a super publisher and I want them to keep coming out with awesome books. 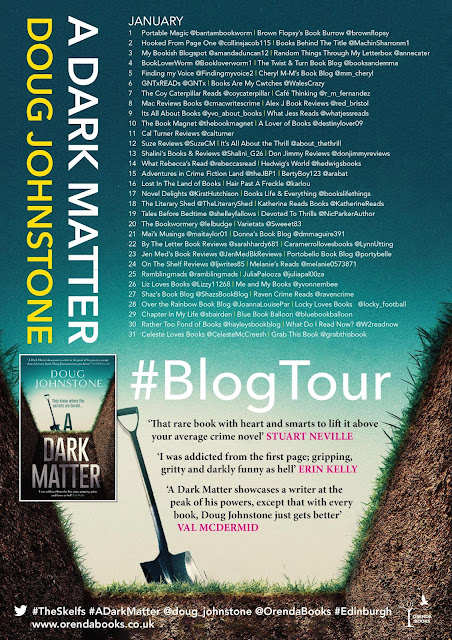