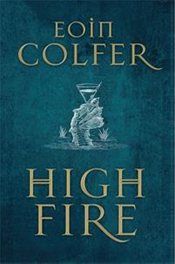 I'm grateful to Jo Fletcher Books for a free advance copy of Highfire and for inviting me to take part in the blogtour.

This book comes with high expectations - it's Eoin Colfer! - and I'm glad to say it fully met them. That's not as foregone a conclusion as it sounds - not only this is Colfer's first adult fantasy (authors don't always transplant well) but he has gone for quite a tricky genre mix here.

Vern is an old guy living in a swamp in a beyond-the-back-of-nowhere corner of Louisiana. He loves his vodka. He's irritable, reclusive and Heaven help anyone who trespasses on his island and disturbs him...

Vern is also the last dragon in the world, living in a swamp in a beyond-the-back-of-nowhere corner of Louisiana. He loves his vodka. He's irritable, reclusive and Heaven help anyone who discovers he exists - because then he will have to kill them...

Also nosing about that swamp are the bright, but underrated, boy Squib Moreau who runs errands on the river, and murderous parish constable Regence Hooke who wants Squid out of the way so he can move in on his mother, Elodie. As you can imagine it gets very complicated. All kinds of things might happen out on the bayou and no-one would be any the wiser. Hooke has wider plans than those concerning Elodie, and there are no limits to what he might do.

I just loved this book. I can't classify it in genre terms. It's not a slick urban fantasy, with an intricate world of supernatural creatures. Yet it's patently of this world, with a convincing setting and powerfully evoking place (from the polluted chemical runoff in the water to the humid air, the mud, decaying vegetation and the alligators stirring). It also has a heartbreaking backstory, in Vern's memories of how his species were wiped out (there are reasons he hides from humans).

At its heart is the encounter between the old dragon and the teenage boy, which is often humorous - they understand each other very well. This is, however, continually disturbed by the grandiloquent scheming of Hooke, who has a military background, a cache of weapons that wouldn't disgrace an average sized state, and plans to employ both. Hooke is a masterpiece of characterisation, a monster and a bully who has always got what he wanted - until he met Elodie. We see a lot inside his he'd, and it's not a nice place to be.

That might be the moment to repeat a warning the publishers have included in the press release for this book - yes, the book does have adult content. There is lots of violence and some gruesome deaths, and also some sexual themes (both comic - we learn what a dragon does with his bits to keep them safe in combat) and less so. While there's nothing really explicit, it really isn't a YA book, a point I suppose that has to be made when marketing a crossover book like this.

It is, though, incredibly fun. We see things through Vern's, Squib's and Hooke's eyes and the plot is pretty straightforward so one can pretty much anticipate what's going to happen. How it happens is though different - Colfer has produced a compelling and action-packed narrative that demands you keep reading and reading: there is no place you can stop, any more than a dragon fully loaded with oil and screaming in for the burn is going to bank away and retreat...

I hope we hear more about Lord Wyvern of Highfire. He must have quite a backstory to explore.

You can buy it at your local bookshop, including via Hive Books, or online from Blackwell's, Waterstones, WH Smith, Foyles or from Amazon. 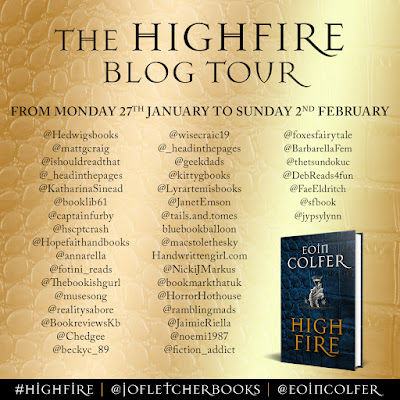