Review - A Degree of Uncertainty by Nicola K Smith 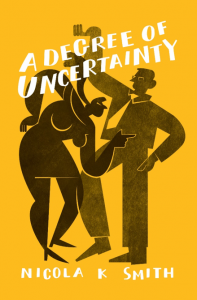 I'm grateful to the author for a copy of A Degree of Uncertainty to consider for review.

A Degree of Uncertainty is a book focussed on the impact a new university is having on the small West Cornish town of Poltowan.

Jobs are being created and business generated for some of the local traders - but houses are also being snapped up for investment and letting, established firms are being replaced by new ones focussed on the students and local families being priced out of the market. Nor are the students happy as numbers increase and the friendly "boutique" experience they were promised fails to appear. Welcome to the marketised world of 21st century higher education. Estate agent Harry Manchester worries about all this, so when it becomes known that the dynamic Vice Chancellor, Dawn Goldberg, is pressing for even more expansion, he decides to take a stand. As the book opens, Harry is about to be interviewed for local TV, but he won't find it an easy ride.

I enjoyed A Degree of Uncertainty. The book surprised and pleased me by not being a semi-comic account of friction between the locals and academics (I have read that book several times) but instead focussing strongly on character and on the complexities of Poltowan and the challenges before it. So, Harry is determined to stop the expansion, for altruistic reasons, but it could be argued that he has a business interest himself. He's also in an emotionally precarious situation, having recently left his wife Sylvia for younger Jo (in no small part at Sylvia's urging). As soon becomes clear, Harry has reservations about this and doubts he can be who Jo wants him to. The emotional currents between the three are complex and they ebb and flow throughout the book, giving the story a real depth and texture.

Pitted against Harry is Goldberg, who could have been made into a 2D villain (she is a formidable opponent, and not above a few dirty tricks) but who is, instead, actually rather sympathetic. Smith makes clear Goldberg's motivations but also hints, perhaps, that she is rather out of her depth. Many of the best scenes were between Dawn and her secretary (and I think only friend) Janice.

The supporting characters are nicely drawn, too, from narrowboat dwelling student Ludo to the mysterious but alluring singer Rockstr (both of whom support Harry's campaign) and the Poltowan business owners (most of whom don't). There is plenty of grey in their motivations, plenty of room for debate about what, really, is right for Poltowan. And there are Secrets. It's a very issue-led book which shows how development and change can split communities and divide friends.

Certainly, as events gather pace, Harry finds his business suffering, his friends turning against him and his personal life coming under strain. He's an unlikely campaigner, really - he just wants to be sitting in his familiar armchair, headphones on, listening to the music of Queen - but once he takes his position, it's as if he can''t shift (perhaps there's some compensation going on for the way his domestic life has lost all its point of reference). But nor is Dawn used to being stopped: as the book's blurb say, something will have to give.

A Degree of Uncertainty is an excellent read. In this, her debut novel Smith creates characters you will care about and enough conflict to challenge them, rooted in a realistic setting and very current issues. I wanted to know more about Poltowan, its people and its future as well as about Harry, Sylvia and Dawn.

Nicola K Smith is a freelance journalist and writer living in Cornwall, regularly contributing to a number of national newspapers and magazines. She studies English Literature at Loughborough University.

Nicola was chosen as 'most promising student' on Curtis Brown Creative's 'Starting to Write Your Novel' source and A Degree of Uncertainty was conceived under their tutelage. This is her first novel.

You can find her at:

A Degree of Uncertainty is available from Blackwell's, from Foyles,  Waterstones or from Amazon here. For more about the book, visit Nicola's website at https://www.nicolaksmith.com
Email ThisBlogThis!Share to TwitterShare to FacebookShare to Pinterest
Labels: 2019, Cornwall, England, modern fiction, universities