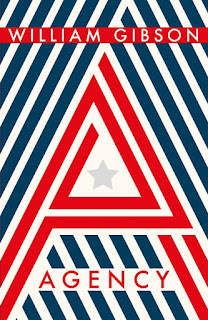 I'm grateful to the publisher for a free advance e-copy of Agency via NetGalley.

Sequel to Gibson's The Peripheral, Agency is a book that can be read as a standalone, although that leaves the reader with a  a job of catching up to do. Still, we are brought up to speed pretty quickly.

The book takes place across three alternate timelines - our world, albeit in 2136, and two versions of 2016, including one where the results of the UK's Brexit referendum and of the US's presidential election were different. With its events taking place in San Franciso, the latter timeline gives some quiet signs of hope in the US: a mural celebrating "the President's" courage, for example ('Her opponent loomed behind her, as he once actually had'). We don't see the outcome in the UK in this scenario. But Gibsons insists that people are generally no happier, not knowing what they've been saved from - and the "jackpot", a horrible future featuring decades of catastrophe, is still coming. Nothing immediately hangs on the difference in political outcomes and we don't see the longterm effects. Rather the conflict that motivates the book takes place under the radar and at a more personal level.

Gibson's conceit is that "our" timeline is the "real" one from which the others are "stubs", branches formed when somebody in "our" world communicates back to inhabitants in the distant past.. How such communication is possible isn't explained (I think that's where reading The Peripheral, which I hadn't, may help) but Gibson uses the idea with gusto, having the inhabitants of 2136 London intervene in 2016 for a variety of reasons - one is malicious and enjoys causing trouble, others see it as a hobby, while our main protagonists - a Detective Inspector Ainsley Lowbeer and her sidekick, Netherton - seek to help. In particular, they're trying to prevent alt-2016 perishing in a nuclear war, and therefore seek traction in that world. (This is challenged by an indignant resident of one of the other timelines as simply colonialism)

At the other end of this process is Verity Jane, a young woman renowned in the tech world as the "app whisperer" and in the tabloids as Stetson Howell's ex. Howell is a powerful force in tech and having broken ups with him, Verity is of great interest to social media. When the book opens she's just about to take a new job evaluating an AI personal assistant for startup Tulpagenics - something that will change her life for ever.

The AI, Eunice*, becomes key to this story and the relationship between it - her - and Verity both touching and intriguing. As chapters alternate between San Francisco and London, we gradually see a more complete picture of what's going on, but to achieve that you need to get your head round some complicated setups involving tele-presencing between the two timelines (and occasionally, all three).

So you can have a character (generally Netherton) living in 2136 London but virtually occupying a drone in 2016 alt-San Francisco, interacting with the inhabitants there and observing that reality through a game-like interface while occasionally exchanging words with someone with him in the (2136) - the conversation also including other characters who are effectively dialled in to the events, from one or other of the timelines. I found it really confusing at times ('...his phone's feed provided by her device's camera. She couldn't see him, though he could show her what he was seeing'), and the descriptions of what was being seen on that virtual display sometimes took a lot of effort to interpret.

There is also a lot of tech speak. 'She's an intermittently hierarchical array, complexly coterminous' for example, or 'a locus of clonic indeterminacy' or 'competitive control areas'. The book is in one sense a lot of extended conversations, undertaken as characters run for their lives. But, new words to learn! At least now I know what "noetic" means.

I realise this may sound as if I didn't like the book. That's not so at all. I really enjoyed Agency and look forward to reading more Gibson. The stuff above doesn't really hold up the narrative or make the essentials hard to follow. And he has some mind-bending concepts - see the character who has had her animated tattoos removed and installed into the hide of an indoor yurt, so that as she sleeps she's surrounded by moving animal figures. Or the idea of an electronic privacy filter created by a circle of dancing bots swirling shawls made of a smart fabric. And there is some really smart, even beautiful use of language here ('Her eyes and chartreuse lips seemed to float there, a disembodied Cheshire goth...', '"...something like Uber," Eunice said, "but for following people"', 'that horror movie feel of any unoccupied cam feed').

Above all, the characters feel real, part of a community, a family, at home ion their places - whether that's Verity sofa-surfing in San Francisco or Netherton with his wife Rainey and his son of even Lowbeer in her preposterous mobile situation room. The book feels deep, these characters care for each other, they have history and have made compromises and they know better to raise certain issues or to do certain things, and Gibson communicates all this subtly, he shows it, for which I can forgive him any amount of tech speak and mind-bending multi-way situations.

It was great fun. But do read The Peripheral first.

For more about the book, including links to buy, see the Penguin website here.