#Blogtour #Review - Till Morning is Nigh by Robert Parker 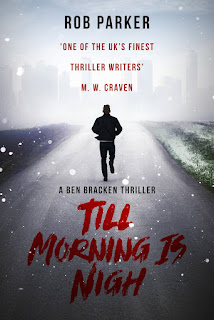 I'm grateful to the publisher for an ARC of Till Morning is Nigh and for inviting me to take part in the blog tour.

I'm really enjoying Parker's series of short, pacy action adventures/ thriller featuring Ben Bracken. I particularly like the fact that while these are at times gritty and engage with current issues and problems - especially this latest instalment - Parker doesn't take things over seriously. His protagonist Bracken is essentially a man on the run, a disgraced ex-soldier who's served time in prison but escaped, irredeemably compromised in the eyes of the authorities and therefore apt to be used by them or back to Strangeways he goes.

Any kind of life he makes for himself therefore risks being blown apart and is an accommodation with powers and principalities which he detests. At times Bracken kicks over the traces and strikes out on his own (and mayhem ensures), at times he is more accepting of the realities. As a result, nothing lasts for long and in each book of the series Bracken is in a new setting, under a new cover, with different objectives and facing different dangers. Parker is happy to shake things up so these settings are very diverse - in the last book, The Penny Black, Bracken stumbled into trouble when hiding out on the Norfolk Broads, here, he is almost rehabilitated (enough time has passed that he and his girlfriend have a baby son) and working a desk job for a police agency based in Manchester.

Bracken is strictly forbidden to go into the field, but if you think that'll stick once the fan needs disinfecting then you don't know Ben Bracken. When an undercover police officer is tortured to death to send a message, and links emerge with ex-soldiers and the Far Right, would you expect him to stand by?

What follows develops - once some preliminaries are sorted in the the first part of the book - into a white knuckle ride of a thriller which benefits from the fact that Bracken is operating (albeit still under a false identity) more or less above the radar. He doesn't have to worry primarily about his own cover, but can work - as part of a team - to address an insidious threat. it's Christmas in Manchester, and after recent political events (but not the 2019 election - ironically given the publication of this book on 13th December!) fascist elements are on the rise. Parker carefully distances Bracken from any close interest in politics, but it's clear this faction is inimical to what he was fighting for in Iraq and Afghanistan. Nevertheless they're plausible, and Parker sketches a chillingly feasible strategy they're using to get close to power. More realistic and current than in previous Bracken thrillers, this second part of the book is topped off by an explosive conclusion where the stakes are very, very high indeed.

I don't think we've ever before seen Parker's hero as close to being broken as he is in Till Morning is Nigh. Not only are the issues more personal to him - he feels real comradeship with the ex-soldiers here - but he has more at stake, no longer being a fugitive (even if he does still have secrets to keep). The book had a thrilling end, and the series as whole seems to have changed up a gear.

You can buy Till Morning is Nigh as an ebook from Amazon here and find out more about it on Goodreads here. If you'd like to connect with Rob here he is: 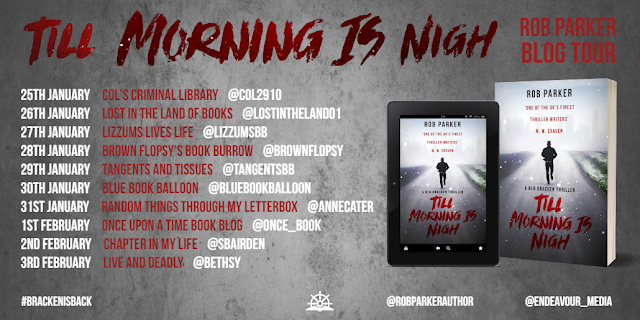