Review - The House of Binding Thorns by Aliette de Bodard 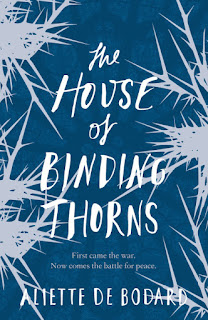 I bought my paperback copy of this book from my local bookshop and received the audio version through my Audible subscription.

I have listened to both on audio and I have to say they have been excellent in that medium; the characters have strong voices for the narrator to breathe life into and much of the story is in reported speech giving the narration immediacy and pace. Helpfully, the narrator of the Wings audiobook was the same as that of Thorns, so there was continuity of the voices in my head (and in my car).

So then. To the story. We are back in the Paris of the Fallen - angels cast down from Heaven who wield powerful magic and band together in "Houses" for their own protection, not to say glory and power.  Decades before, a magical war ruined Paris (and the wider world) leaving the Houses diminished, though still strong. The House of Binding Thorns picks up pretty much where The House of Shattered Wings left off, with Madeleine - Essence addict and former alchemist of House Silverspires - back unwillingly in House Hawthorn, under the sway of the dangerous Fallen, Asmodeus. Madeleine's life over the previous 20 years was devoted to her fear of Asmodeus, who murdered her friends and nearly killed her when he took power in Hawthorn, so as this book opens she really is at a nadir.

But life can be surprising, and Madeleine is about to be given a chance to improve her situation - if she'll undertake a dangerous mission for Asmodeus.

Like its predecessor, The House of Binding Thorns focusses on one house - here, Hawthorn - and the threats to it, but for me it had much more of a feeling of movement and freedom than Wings did. While The House of Binding Thorns seemed to take place mostly within the mouldering corridors of Silverspires, apart from an excursion to the dragon kingdom under the Seine and a couple of visits to other Houses, in Thorns we have a much more extended story. There is a longer visit to the Dragon Kingdom, exploring its politics, history, and plight, and there are other events across Paris, in particular in the home of two new characters, the Houseless Fallen Berith and her human lover Françoise. Their relation to Hawthorn and the Dragon Kingdom isn't clear at the start and I don't want to spoil the story, but they are well-drawn, distinct characters who bring a great deal to this story, representing the perspective of those who are not "House bound".

They are also friends of Phillipe, the young Annamite man we met in the last book, who is still seeking a way to resurrect Isabelle, who died in the earlier book. Despite Berith being Houseless, Phillipe does not wholly trust her - she is Fallen, after all, and he has reason to fear Fallen and to hate them for what they've done to him and his people. Trust and distrust feature strongly in this book: trust between rulers and ruled, even where there is hatred and fear in the relationship, trust based on understanding and alignment of motives, on power, and trust - or the lack of - within and between cultural groups (the dragon Kingdom, the Houses).

Despite his distrust, Phillipe is, it turns out, Houseless in a similar sort of way to Berith. She has rejected the House that might have sheltered her. Phillipe, as we know, rejected the Dragon Kingdom. Both must find a way to exist in a dangerous Paris with little help from others. The story develops this parallel to show how the Kingdom wields power in the same kinds of ways as the Houses, providing no real alternative to the Fallen and their magic.

And de Bodard continues to explore, using her Paris and her dragon kingdom, aspects of colonial history (such as the British opium trade) that are often passed quickly over and certainly, are rarely made the foundation of fantasy fiction. Again, the wider scope of this second novel and perhaps its faster pace gives much more room to do that. It is in many ways simply a "bigger" story. Rather than a central mystery, there are half a dozen subplots where characters get themselves caught up in the thorny branches and drawn into the main growth. There are unlikely alliances born of despair, and some unexpected betrayals too.

The star of this book is, though, Asmodeus. He appeared in The House of Shattered Wings as a convenient antagonist but here he is at the centre. Asmodeus - a bully and a sadist - is far from likeable, but he is still a bewitching character who simply comes over as more complex, more enthralling than Selene, the Head of House Silverspires on whole the first book was centred. Maybe the Devil really does have all the best tunes, or, Miltonically, evil is more interesting than good but I really felt this book crackle whenever Asmodeus appeared. Perhaps de Bodard let herself go a bit more with Asmodeus? Whatever, she has produced a compelling and even beguiling portrait of this damned angel, a figure who comes alive on the page (or in the audio) and commands every scene where he appears.

I think I actually enjoyed this book more than Shattered Wings, it's a stinking read in itself and carries the trilogy forward brilliantly, setting the stage, I hope, for a terrific ending in the third book.