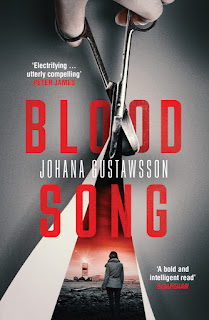 I'm grateful to Orenda Books for an advance reading copy of this book to consider for review.

Johana Gustawsson's crime fighting pair, profiler Emily Roy and crime writer Alexis Castells, return together with Roy's protege Aliénor and the usual gang - Commissioner Bergström, Detective Olofsson, Castells' overbearing mother Mado. It's always a joy to meet them: Gustawsson has created a truly convincing cast of regular characters, convincing in their ramified relations - and not least, for their quirks and failings.

The events which bring everyone back to Falkenberg this time are though both happy and very sad. Alexis is preparing for her wedding - cue Mado issuing advice and generally taking charge - when Aliénor's family, who we have seen little of so far, is subject to a horrific attack. Emily - and then Alexis - offer to help with the investigation while supporting their friend. (I though Gustawsson's portrayal of Aliénor's, who has autism, reaction and feelings here was both sensitive and heartbreaking).

The investigation leads us into the world of fertility clinics and corrupt practices that take advantage of desperate would-be parents, while - as in the earlier books in this series - there are chapters set in the past, this time starting in 1930s Civil War Spain. That historical narrative is very grim, very hard reading, describing the brutality and murder inflicted by the victorious Fascists not only on Republican combatants and prisoners but on their families, for generation on generation.

Another strand of the story begins in 1990 with a woman who, at her grandson's baptism, unexpectedly faints and whose life goes to pieces after.

Of course these threads in the novel are all linked and it's Alexis's, Emily's and - heartbreakingly - Aliénor's task to work out how. As always, Gustawsson's description of how these different (and in their different ways, rather strange) women work together to solve the case. The portrayal is given heightened texture by being shown from different perspectives - there is Olofsson's rather sneering, dismissive attitude to both Emily and to Aliénor (who he privately things of as "Google") as well as Aliénor's own perspective, for example.

It's a book that is, despite the horrors described (not only the Spanish episodes but the present-day murder) quite, quite enthralling and compulsive. I'm so glad that this series continues, and I hope to see many more cases for Roy, Castells - and Lindbergh.

I'd like to add a personal note here. My father was in the RAF before and during the Second World War and was stationed for some time in Gibraltar doing photographic reconnaisance. I remember him telling me how gunfire would be heard during the night from the border - which was apparently the Fascist forces executing prisoners. It was believed they did this in order to intimidate the Gibralter residents and the British forces stationed there.  I never quite knew what to make of this, but after what I have read here - and Gustawsson provides a historical note to back up what she describes - I am rather inclined to believe this.

It's a sobering book all round but an excellently told story.

For more about the book, including links to buy it, see the publisher's website here.