Review - The Return of the Incredible Exploding Man by Dave Hutchinson 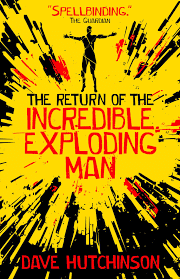 I'm grateful to the publisher for providing me with a free advance e-copy of this book via NetGalley to consider for review.

This is a slightly deceptive book (which to me is a Good Thing: see below for why) as despite the pulpy title (and image) Hutchinson delivers what seems at first to be quite a restrained story. Alex Dolan is a washed up journalist, cast overboard as media transforms and traditional titles founder, who is rescued from debt by billionaire Stanislaw Clayton ('Stan').

Clayton is pouring money into a new high energy physics project, the Sioux Crossing Supercollider ('SCS') designed to investigate and manipulate gravity - but things aren't going well and he wants to generate some positive publicity for the enterprise. So Alex is invited to stay in Sioux City, a slice of small-town America apparently preserved from ruin and decay by Clayton's billions. No, not apparently.  It has been preserved - or where necessary, rebuilt. The locals are in equal measure resentful to an all-powerful outsider and desperate for Clayton to continue his support, giving Dolan some difficulties in coming up with an interesting angle on the SCS.

It's a delight to read about Alex's encounters with Sioux City and its residents (both locals and the staff of the SCS), his very slowly growing misgivings that everything seems too perfect, and the undercurrent of weirdness that pervades Sioux City (from the basement full of guns in his rental house to yellowing newspaper stories describing strange past events). Hutchinson gives us an even paced, shrewd, and cooly perceptive vision of the place and its people, allowing it to unroll gradually, with the details of everyday life - getting lost on an unmarked road, dealing with a gonzo physicist who frequents seedy bars (OK, maybe that's not 'everyday') or playing chess with a neighbour - given weight and significance (as are the comparisons between pretty, lucky Sioux Crossing and the less well kept, indeed downright shabby, towns that surround it).

I found all this a joy. For the reader demanding instant action, little may seem to be going on but for me, it is all happening, even as Alex struggles to get a grip on the book Clayton wants written and small obstacles begin to appear in his way. Hutchinson has I think a real knack for getting under the skin of life, making the ordinary significant and drawing his readers in through detail and cool observations rather than lectures and infodumps.

But yes, there is a point where everything changes and this becomes a rather different sort of a book.  It's hard to say a lot about this for fear of spoilers. The weirdness begins to show more and more, and Alex becomes the focus for someone with a grudge. His discomfort with this is in no small part due to his having a connection with British intelligence, which makes cooperating with the Local Police Department to get to the bottom of the crimes rather difficult (and given how friendly the locals are, itself racks him with guilt and indecision). Strange things begin to happen, which both acknowledges and denied by those around him, the basic weirdness of Sioux City itself providing a disorienting background to what is now going on.

The closing part of the book is then definitely fully science-fictional and builds skilfully on the earlier narrative, with mysteries explained (apart - I think - from one - why a certain person was driving a certain car just before the story turned?).This end part is satisfying in itself, if startling, but I was a little sad that so many strands from the earlier, gentler part were left unresolved: the enigmatic Clayton, the book Alex was writing, his relationship with Wendy, the prickly, hostile Prof. Delahaye who takes against Alex. I could easily have read a book twice the length which went into these things in more detail.

All in all this is an absorbing book, great fun to read with an intriguing mystery at its heart.
Email ThisBlogThis!Share to TwitterShare to FacebookShare to Pinterest
Labels: 2019, future, SF, USA