I'm grateful to Gallancz for an advance free copy of Sanctuary for review as part of the blogtour.

You should be aware that I've included a significant spoiler which I think is necessary in order to give a content warning  for the book. That is below the tour graphic at the bottom of this review: if you want to avoid the spoiler don't scroll down past that picture.

I first heard about this book at a Gollancz presentation a few months back at which James spoke. There were a few copies available then but I didn't manage to get one (competition was FIERCE!) so was very glad to be asked to take part in the tour because I REALLY wanted to read this.

James' new novel is set in a different world from her previous trilogy (Gilded Cage/ Tarnished City/ Bright Ruin) and in the US rather than the UK, but like that, it explores the theme of magic - visible, acknowledged, magic - in the real world; what the consequences might be, and how the magical and non-magical communities might see each other.

In Sanctuary, which takes place in contemporary New England, witches are accepted, even valued by some, and expressing prejudice against them can amount to a hate crime, but their activities are heavily circumscribed by law...  and that prejudice is never far beneath the surface. James skilfully uses the real history of persecution in the 17th century as a springboard for present day cultural attitudes in the town of Sanctuary and in the wider US (adding modern colour by including news broadcasts and even tweets from the current President). She also deftly indicates how tolerance could have come about, and some of the complexities that accompany it.

We are though in small town America and magic or no magic, the local culture is dominated by the school football field.  Tensions rise when Daniel Whitman, star player of the Spartans, dies in mysterious circumstances at a party. An outsider detective - not only a woman, but she's Black - is sent in to investigate, and to begin with, local police chief Tad Bolt pressures her ('This is how it's gonna be...') to shut things down quietly. The death was clearly an accident: nothing to see here: smooth things over and get out of town.

However, Bolt soon changes his tune, claiming that witchcraft was involved. It's clearly convenient to have an outsider take the heat of the subsequent enquiry, whatever the outcome so Det. Maggie Knight is  plunged into the dark world of modern teens, complete with High School cliques, a "sex tape", lashings of misognyny - and a bunch of secrets.

Accusations fly, and they are directed especially at Harper Fenn, daughter of the town's only witch, Sarah. This is particularly unfair because, as everybody in the twin knows, Harper shows no magical ability (a great sadness to her mother).  Knight has her work cut out to discover what really happened against a background of rising hysteria stoked not only by Bolt but also by one of the other characters here. (James' writing is very strong, and I guarantee by the time you've finished this book you will really dislike that person - even if you sympathised with them at first). The growing atmosphere of threat, of blame, of fear and hate, is very powerfully rendered and plausible. It's accompanied by references to other sorts of prejudice - for example racial, as when towards the end when a Black character is told by a cop to hand over his phone: ('Pierre does what every black parent, heartbreakingly, teaches their kids to do the minute they see lawmen reach for their guns. He complies instantly.')

I would like to note how well, how convincingly, James portrays this situation. In particular she shows Sarah's disbelief at the way her world is falling apart. For much of the book Sarah thinks she can resolve things by being reasonable, trying to persuade even the most hateful among the townsfolk to calm down and be fair. She even, haplessly, plays into their hands by performing (harmless) magic in public which is then used to undermine her. It is of course a feature of historical persecutions that victims have often only understood too late how far things have gone, how their friends and neighbours have turned against them and what the stakes really are.

It's a thoroughly compelling story with bags of tension. I felt there is actually a really interesting philosophical issue here. From the perspective of the early 21st century (is it still "early"?) prejudice against, and persecution of, witches, was self-evidently wrong since the modern secular worldview takes for granted that there are no witches - so accusations of harm must be mistaken at best, or invented at worst. That approach sidesteps questions of "innocence" since by definition anyone accused in historical witch persecutions must have been "innocent" - even if, at the extreme, they really thought they were a witch.

From that point of view James's aligning anti-witch prejudice with other forms of hate crime (against people of colour, for example) makes sense because both are irrational and patently based simply on prejudice. In our world, there may be people who call themselves witches, but society regards this as a harmless if eccentric practice - a kind of spiritual LARPing - and anyone who doesn't, who accuses them of actually doing harm, would I think be seen as acting from prejudice.

But this is a book where witchcraft is A Thing. In Sanctuary, witches are real and could undeniably cause supernatural harm (even if that would be illegal and most of them would never do such a thing). Against that background, I wondered whether the Salem echoes - and the implicit comparison with prejudice against marginalised groups - were really on point.

In the end, I'm not sure it matters - at the heart of this book is a disturbing campaign waged against a convenient victim, supported by prejudiced law enforcement, a sensationist Press happy to peddle half-truths and outright lies (regardless of the effect on a police enquiry) and a town willingly driven to a frenzy against a hitherto accepted and welcomed neighbour. If that doesn't have spot on contemporary resonances I don't know what does.

The book is also notable for the presence of same gender relationships and for a non-binary Indigenous person who Knight brings in for support on witchy issues (entailing an interesting subplot about different forms of witchcraft, including appropriation of Native ones - James makes clear that in this book she isn't drawing on any real practices or systems of belief, which I think is an important point to make here).

So - I'd strongly recommend this, whether you've read and enjoyed James' previous work or are simply interested in a slightly different take on UF, small town US tensions or modern magic.

The book is out this Thursday (8th August) and the tour runes from Monday 5th to Sunday 11th with lots of excellent reviews scheduled. For more info about Sanctuary, see the Gallancz website here. You can buy the book from your local bookshop, including via Hive books; in various formats online  from Blackwell's, Waterstones, Foyles, WH Smith and Amazon or as an e-book from Apple, Kobo or ebooks.com


Reminder: CW below the graphic includes a spoiler 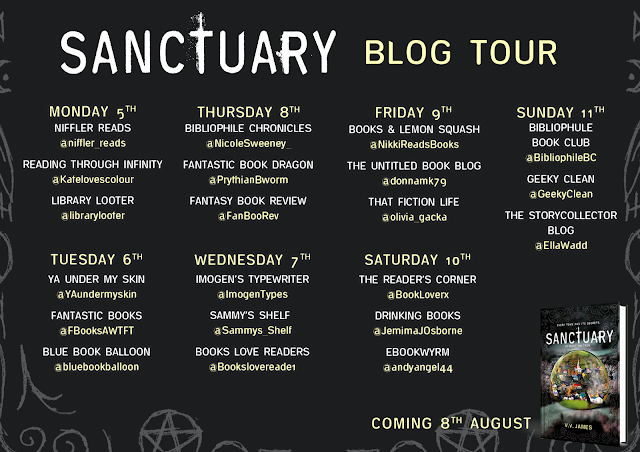 Content warning: The events behind the story include a rape which has taken place before the main events of the book, but it is partly described and portrayed in the course of the story.

The scene is not, in my view, gratuitous and is integral to the plot.
Email ThisBlogThis!Share to TwitterShare to FacebookShare to Pinterest
Labels: 2019, magic, New England, police, Urban fantasy, US, witches