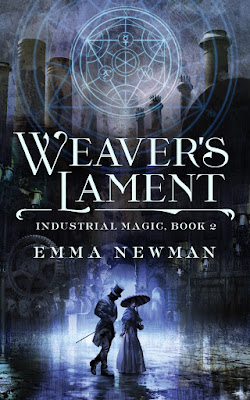 Another adventure for Charlotte Gunn, following Newman's Brother's Ruin, published earlier this year, and again in novella form as is becoming increasingly popular in SFF.

This time, Charlotte's off to Manchester, Cottonopolis, seat of the Industrial Revolution, where vast profits are to be made by the mill-owners. In Newman's world these mills are driven by magic, not steam, so we can expect less smoke in the air, but the workers are nonetheless sweated by their overseers, put up in filthy, cramped conditions and doing fifteen hour shifts in stiflingly hot, dangerous conditions. And they face other threats, too, as looms shatter and the overseers wield their straps to maintain discipline.

Charlotte's brother, Ben, has summoned her to this living hell (what's the quickest way out of Manchester? Drink) to assist him. Once again, she puts love for her brother first and agrees to go undercover in the mill to investigate the nest of Socialists he believes responsible for the damage. But Ben is working for Ledbetter, the magus who Charlotte knows has dark secrets.

This book was great fun, if that's possible in something that also sets out grotesque inequalities and cruelties that are often lost in the soft focus, Hovis-ad language of drama and storytelling. In particular, fantasy, whether epic, pseudo-medieval fantasy or its edgier urban cousin, still too often sees curation of the social hierarchy as the greatest good. In contrast, what Charlotte discovers here will, I suspect, drive her to seek the otherthrow of the hierarchy. It remains to be seen if she will carry her brother with her in that - I fear not, Ben comes across as something of a milksop, a man keen to ingratiate himself with the bosses, wanting his own mill to run.

I'm even doubtful of Charlotte's mysterious ally/ tutor, Hopkins, who pops up Gandalf-like to give advice a couple of times. Is his heart really in a challenge to the authority of the Royal Society of Esoteric Arts or does he have an agenda of his own? (Charlotte certainly has an agenda of her own when it comes to Hopkins, even if she hasn't realised it yet, one her stuffy fiance George may not like much - I can see some of that absent steam reappearing before long...)

In short - and this is quite a short book - this is an eminently readable and at time unflinching view of the Industrial Revolution, blended skilfully by Newman with a dose of magic. Charlotte's awareness of the world around her is developing and she's pitted against a particularly nasty form of exploitation.

I will look forward to the new Industrial Magic, hoping, though, that Newman will be able to write some full-length stories set in this world. The novella form is great but it would be wonderful to let these stories breathe a bit more.