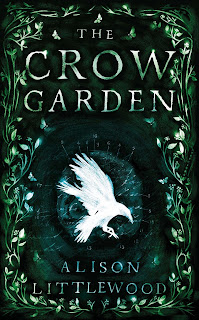 In Littlewood's latest horror story we are back in Victorian England, visiting that quintessential Gothic location (second, perhaps, to the ruined Priory), the lunatic asylum.

Dr Nathaniel Kerner has taken up a post at Crakethorne Asylum, described most encouragingly in the opening chapter: a brooding, chilly building beset by wind and haunted by the crows after which it is named (Grey stone was unleavened by lightness or decoration") and presided over the Dr Chettle who, we soon learn, has little interest in his patients and spends most of his time pursuing phrenology - even then, a marginal and quackish science. Kerner has tragedies in his own past and is driven to earn the (posthumous) approval of his discredited father, indeed one might think he's not the most stable and suitable of characters to be treating the "insane" (as they're labelled).

Despite this, Kerner's ideas of treatment by talking seem modern and enlightened compared with the regimes of blisters, bleeding, electric shocks and cold baths apparently in vogue at the time. The book is sharp in its perceptions, discussing what's almost a hierarchy of establishments practicing more or less modern or primitive treatments, and of the way this plays into the choices made by those responsible for committing unfortunate relatives to their "care".

In particular, Kerner's life is to become entangled with that of Mrs Victoria Harleston, committed for shrinking form performing her "wifely duties". Mr Harleston is eager that his wife be brought to obedience and presses Kerner and Chettle to do whatever is necessary. The scenes in which Littlewood exposes the situation of a woman at the mercy of the (male) law and society are some of the most chilling I've read in fiction, supernatural or otherwise - but that isn't the end of this story. Rather there is much, much to be told with Victoria herself emerging as a fascinating, passionate and contradictory character - especially compared with poor Nathaniel who's mostly two steps behind her. (indeed, as a viewpoint character he can become a bit tiresome at times, with his assumptions about women's fragility and a rather touchy ego to boot - at others his pomposity becomes almost endearing).

Littlewood uses a clever motif to explore Victoria and Nathaniel's relationship, quoting from Byron (for her) and Robert Browning (for him). These are their preferred poets (the good Doctor rather huffily confiscating her book of Byron's verse which he declares unsuitable and likely to make her delusions worse) and indeed as the story proceeds they take to referring to "my poet" or "your poet", the subtlety of the relationship marked by Kerner's beginning to see more passionate depths in his Browning that he had realised before. The whole effect has something of the Gothic romance - and claustrophobia - of Wuthering Heights combined with the menace of Wilkie Collins or Dickens exposing the cruelty of the Victorian mental health system. At the same time, this system is contrasted with short but spells that do, indeed, promise "asylum" from the darkness without, moments when the reader does begin to hope for some good resolution.

Reading over this I realise I have said anything about the supernatural elements in the book - well, they are there, contributing especially to the brooding menace of the final part but in this story the burden of the horror is, I think, really borne by darkness that emanates from humanity. The questions the story raises - about sanity, madness and evil - are independent of whatever it is those restless crow spirits may be up to, and in the end, it's man (or Man) who is the monster here, I think.

An excellent, chilling, autumn read, all about the dangers of power, obsession, and guilt, this is sure to be another hit from Littlewood to follow up The Hidden People.