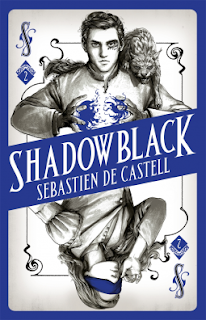 Shadowblack takes up Kellen's story from Spellslinger soon after his flight into exile from his homeland and the haughty magicians of the Jan'Tep, accompanied by the mysterious Argosi woman Ferius (whose real name, we learn here, is The Path of the Wild Daisy) and the thieving squirrel cat Reichis.

The story is rather simpler, rather more pared down than that of Spellslinger, which introduced not only the Jan'Tep and their magic (most of which Kellen has been blocked from) but their world (and especially the freespirited Argosi).  It's all about the shadow black, the demon-haunted marking which has cursed Kellen and caused him to be exiled. Others are beginning to show the signs too. is this the start of a plague? If so, Ferius's fellow Argosi, Rosie, maintains that the ominous-sounding Way of Thunder may need to be invoked. Kellen, Ferius and Reichis must investigate.

The book is well written and the story fairly rattles along, presenting Kellen with successive challenges: combat, new forms of magic, and, perhaps, the stirrings of romance when he meets Seneira (the scene where Ferius tries to teach Kellen how to be "handsome" is both funny and touching). Like Spellslinger, it consciously has some of the atmosphere of a Western - most obviously in the outlaw setup and in Ferius's drawling language, but also in Kellen's response to his surroundings: "I might have found the landscape pretty if people here would just stop trying to kill me". Unlike Spellslinger that comes across as... perhaps if I say it's a bit purer? We don't have the Jan'Tep ritual magic setup, we open with the outlaws attempting a heist and move on quickly to them riding the scrub and sage of the Seven Sands. The theme seems clearer, perhaps (not that I'm saying Spellslinger isn't great, it is, but I think Shadowblack is slightly better).

The secondary characters here are also well drawn, from Seneira and her father to Dexan, another spellslinger who knows the trials kelley's going through and offers help - at a price - and the Whisper Witch, about whom I'd like to know a LOT more. They people this world convincingly, and present kelley with new kinds of challenge and as has to ask himself what path he will follow. That of the Argosi? Of the spellslinger? of the student, with people of his own age and background?

Kellen is starting to grow up, to become more confident in his power and in who he is. he is still angry at what has been done to him and at the danger his friends and family are placed in, but we can begin to see him mature into somebody who will be able to do things about that.

I can't wait for Charmcaster, due next May.