Review - A Long Day in Lychford by Paul Cornell 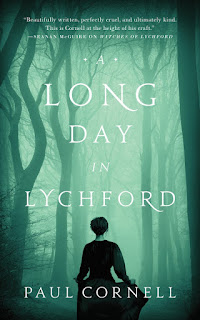 The story again revolves around Autumn, Judith and Lizzie, shopkeeper, wise woman and Vicar, collectively the Witches of Lychford, protectors of that ancient Cotswold town from outside supernatural threats. Except that, in this book, they're not. Not exactly.

That's where the review gets tricky because I don't want to give too much away. I'll just say that this is a more psychological book, more internally focussed, more driven by the character and experiences of the three and especially, of Autumn. Indeed, Autumn's identity as the only woman (indeed person) of colour in the town is key, here, to understanding what happens. In a story that cleverly hooks into threats in the wider outside world - the divisions caused by the Brexit referendum, the evil banality that is Trump - we see the impact on what are now well-loved characters.

That political angle may alienate some, like Cornell's last book, Chalk, which picked up on the Thatcherite 80s, although of course that is further off and less relevant, perhaps, to non British readers. But it gives the book a real sense of groundedness.

The other respect in which this book is different is that - to a degree - it challenges some conventions of fantasy. For example - and relevant to Autumn's experience - the use of the word "dark" for "evil" is questioned (by Lizzie). And in a story that's pointing up real-world developments around control, exclusion and access, the role of the Witches in "guarding Lychford's boundaries" raises some discomfort. Does this whole outlook not come uncomfortably close to the "let's build a wall and keep them out" rhetoric that we're now seeing?

Cornell isn't so presumptuous as to provide answers to all this, but in a short novella, he certainly raises issues and that gives this story a freshness and interest. No, some may not like it, but I think this is nonetheless an important book in its genre and more widely.