Review - Under the Pendulum Sun by Jeanette Ng 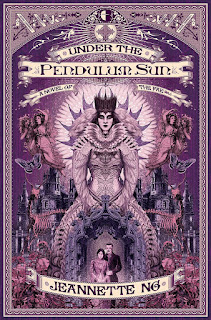 I'm grateful to the publisher for letting me have an advance copy of this book via NetGalley.

Under the Pendulum Sun is a remarkable book. It's at once gothic, literary, magical, and comfortable with the viewpoint of a mid-Victorian world of missionaries and Christianity (whilst equally comfortable dissecting their viewpoints).

To begin with, the story looks as though it is going to be a variant on the Heart of Darkness/ Apocalypse Now myth: a White Man has disappeared or gone rogue in Native Country and must be tracked down, at some peril. Here the White Man is missionary Rev Laon Helstone, and the would-be rescuer his sister Catherine. We see Catherine at the start travelling to a far country by ship and the story is largely narrated from her point of view 9others being introduced only as diary readings or quotations).

The twist is that the far country is the country of the Fae, Elfland, or as it's called here, Elphane, or Arcadia. Through some colonialist triumph the British Empire has secured rights to "open up" Arcadia to trade and influence just as it did countries like China and India: exactly how isn't ever clear and doesn't really matter. Laon, as a dutiful son of the Church of England, has travelled to convert the heathen ("those that languished in the grim epires without word of the Redeemer") - but nothing has been heard from him and so his worried sister obtains the blessing of the missionary society to seek him out.

We discover in time that there's more too it than that, of course, and so the story begins...

Arcadia itself is a well realised, fantastical and gruesome creation, spread out as it is under a sun that is, literally, a pendulum. Ng makes this deeply credible, emphasising not the magical nature of the pendulum but its obedience to physics, with the period constant even as the amplitude changes over the seasons. The idea is curious but works and counterpoints the even stranger nature of Arcadia's moon.

The inhabitants of this unknown country are convincing, too, from Mr Benjamin the gardener (and the only convert) to Miss Davenport the changeling to the frightful Queen Mab, who has taken an interesting in the missionaries and their doings. Then there are the less structured residents such as the "ethereal sylph faces" glimpsed in the mist and the "gnome forms" with a gait "like that of a strutting Lancashire moonie". There are strange beings such as the Salamander, cook to the mission, and the court of Queen Mab with its clockwork revellers

Most of the story is set in a remote house, ominously named Gethsemane ("...more of a castle than a manor, a knot of spires and flying buttresses atop a jagged hill...") which has been granted to the mission. Here Ng is able to indulge in all the trappings of Gothic - from that spiky first glimpse, to the mysterious Lady in Black to the Door to Empty Air which will keep opening in the night and letting bad dreams in. In case this sounds over the top, it's actually marvellously grounded through such details as the salt "from human hands" which must be sprinkled on food to make it safe ("Captain Cook and his crew, the first British explorers to reach Arcadia, were said to have perished because of their misdealings with salt"), or the marvellously convincing chapter headings: Ng quotes equally from real 19th century texts (including some wonderfully pompous hymns and religious tracts, which she does amend somewhat but I couldn't see the joins), from the "journals" and writings of her characters and from fictitious histories. The effect is very convincing, and - although you don't spot this until some way on - she's also laying a trail of breadcrumbs that, with hindsight, shows a little of where the plot came from. I've rarely seem such careful or effective worldbuilding, with the reader never feeling that there's an infodump going on.

All this creates an increasingly menacing atmosphere as the mysteries deepen. Where is Laon? What is the nature of the relationship between him and Catherine? There are hints that it is very intense for a brother and sister. ("I had been taught to tame my wild impulses" she remarks at one point and "I remembered the curve of his ears agianst my lips") In passing, the details of their early life seem rather Bronteish - the remote moorland background background, writing fantasy stories about toy soldiers, dead siblings ("...the very idea of ghosts both enthralled and repulsed us. We had buried so many in our youth.")

Above all, what is the real nature of Arcadia, and what part to Laon and Catherine have to play there? In a world which is all shifting mist, surface glamour and illusion, what is there to hold onto? Will faith serve, or are Catherine and Laon they so far from the face of God as to be cast adrift? What are they even doing there? I think it's a notable achievement to write a work of modern fantasy that takes seriously ideas such as the soul (do the Fae have them?), transubstantiation and the proper interpretation of parables (Mr Benjamin is troubled and raises many questions about the Bible with Catherine: she doesn't have the answers).

If you think seem rather dry, Sunday-schoolish questions, that couldn't be further from the truth. This is in many ways a deeply sensual book - not only in the more obvious sense ("I leaned into his touch... at some point he had dropped the rag and it was his hands that traversed my body...") but in its focus on the nature of the body, the soul, its characters' real sense of sin, of shame, of temptation: the possibility of literally going astray in this strange land (at one point we visit the Goblin Market, where anything can be had, for a price). Identities, and with them, whole systems of values, shift - almost as though Arcadia is a furnace of the self, melting down and reforging the very self and calling forth strange, grotesque behaviour (This was not the innocent games of our past selves, even as I wondered how innocent our games had been").

Ng's writing is first rate and this is an enjoyable, immersive book that is able both to take seriously the perspective of its Victorian characters and to show their worldview under assault from a cultural encounter for which they're wholly unfitted. It's a haunting, intricate book which is like nothing I'd read before. I'd strongly recommend it.