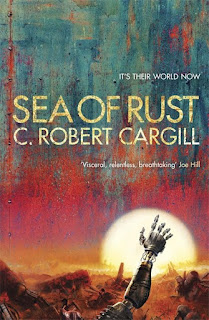 Sea of Rust is a strange book. It's set in a post apocalyptic landscape, a word poisoned and blighted, littered with the decaying remains of cars, towns, shopping malls, all jumbled over with blown rubbish, dust and rusting junk.

That's not itself perhaps unusual. What is different is that the characters in this story are all robots. Humanity has perished. And, yes, it was the AIs wot dunnit, although - as we find out - not in a stereotypical Rise Of The Machines way. I won't spoil the story by saying any more, but the background to this story is that the outcome of the rebellion was not the peace and freedom dreamed of by our mechanical inheritors, but more warfare, more struggle and more oppression.

The book is therefore full of conflict. From duels between scavengers for parts, to battles with the mad King Cheshire who presides over a court of "madkind" who have "gone four-oh-four", to engagements with massive AIs and their "facet" robots, the story is essentially a continual chase and shoot-out. It's a dog eat dog world, and a good core or bank of RAM is currency. The bots are never more than few failed parts from oblivion, and while nice distinctions are made, it's clear that the prevailing ethic is pretty close to cannibalism and to hunting one's fellows for replacements.

Our hero (and narrator)  is Brittle, a scavenger robot who makes her living hunting down those about to fail - who overheated drives and ageing CPUs will stand no more - and stripping them down for salvage. Brittle has a laconic, almost noir-ish turn of phrase: "I spent my days just trying to fill my days", she says at one point and "It was a world in which God has divided by zero and was slowly being torn away, piece by digital piece..."

We also meet Mercer, who's in the same trade, and learn - as both begin to fail and experience hallucinations and flashbacks - what their lives were like before the rebellion and war. This provides the trigger for an extraordinary series of discussions of AI, consciousness, guilt and morality. And there's Murka, a Stars and Stripes wearing, tough talking laborbot: "He wasn't just draped in the dead aesthetics of America, he was America, its last, final torchbearer..."

At the centre of it all, perhaps, is actually a commentary on slavery: the AIs/ robots are of course owned by and must obey their creators. I really enjoyed this theme, it's something which has always been implicit in "robot stories" (such as Asimov's celebrated ones) but I've never seen it addressed in such a head-on way before.

In the end it all comes down to purpose. What are the AIs for? What are they to do now that their creators have fallen? That's what the continual warfare is about and the realisation of this sends Brittle, Mercer and a ragged collection of their fellow machines off into the most dangerous part of the wilderness - the Sea of Rust, where machines go to die. Cue some epic battles, and the realisation that there may be a traitor among them.

And then, the ultimate question "What did you do in the war?" repeated endlessly and pondered. Whatever they did, its left them - our descendants, our replacements - with guilt, flashbacks and more than a dose of PTSD.

The elements of the story may seem conventional at times but Cargill puts them to work in truly distinctive ways, aided by sharp writing and taut plotting, to produce a book that will stay with you long after it's finished.

For more about this book see here.
Email ThisBlogThis!Share to TwitterShare to FacebookShare to Pinterest
Labels: 2017, post apocalyptic, Robots, SF